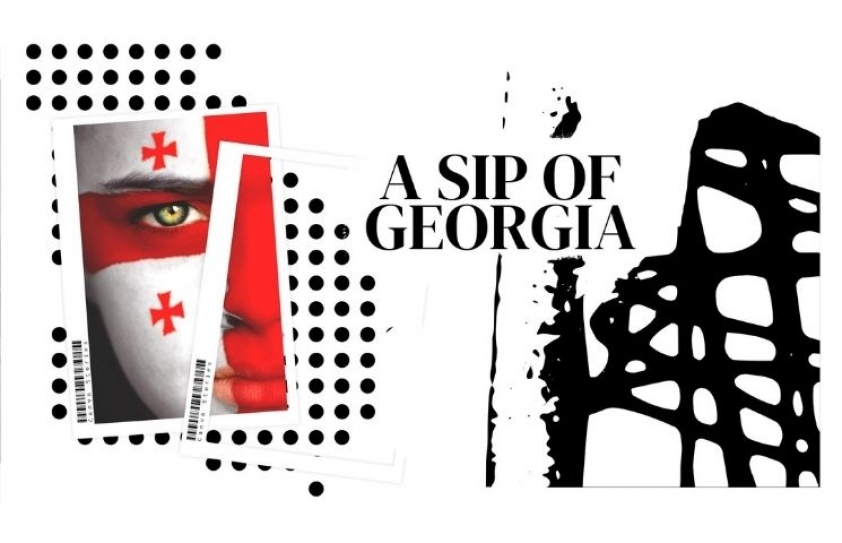 A Sip of Georgia

Vandana Kumar reminisces about her visit to Georgia where she discovered that it is the country where wine originated. Unlike in France, which has a tradition of winemaking since 2000 years, Georgia boasts of its origins in the 6th century BC.

As far as associations go and popular culture is concerned, thoughts of France generally conjure images of its architecture and its cuisine. Obviously to think of French cuisine is to think of its wines, cheese and its desserts. In fact this childhood perception got further established in the mind when studying French much later in life.

The classes on culture and civilization (when not studying grammar and literature) particularly emphasized the country of the Franks as the place where all roots and traditions of wine making can be traced.

It was only when I went to the beautiful country of Georgia in 2017, that I got a rude shock. Georgia is a country in Eastern Europe and it used to be part of the former Soviet Union. The Georgians were aghast to discover that I didn’t know wine originated in their country and they felt my education hadn’t quite been what it should have.

This set me on an exploration. I was curious as to how both countries claimed to be the birthplace of wine. French wine originated in the 6th century BC, with the colonization of Southern Gaul by Greek settlers. Wine has been around for thousands of years in the countries on the Mediterranean but France has made it a part of their civilization and has considered winemaking as art since the last two thousand years.

In 2017, coincidentally the year I visited Georgia, archaeologists discovered traces of wine making in ancient pottery shards there, going back 8,000 years. This got the ‘small new country’ (as some of the locals call it after the disintegration of the USSR and the creation of Georgia) excited about being the native home of wine.

The trips up and down from our hotel in ‘Tbilisi’ were to the various places of interest, The Holy Trinity Cathedral, one of the largest orthodox cathedrals in the world to the ‘Svetitskhoveli’, the main cathedral of ‘Mtskheta’ and a sacred place where the robe of Christ is being kept. We also covered the breathtaking view of Mt Kazbegi and the bluest rivers that could be. Our impatience was writ all over, though we thought we weren’t being obvious. It was evident that our main focus was wine making to all the guides accompanying us. The vineyards and the wine tasting happened with the wonderful Georgian lady ‘Manana Bosto’ and a Chauffeur by the name of ‘George’. The rides on route to the touristy places were filled with anecdotes of the local population. We saw from a distance the tunnel built by Hitler. All the east European invasions by Hitler that were just names and dates from my history studies came alive. 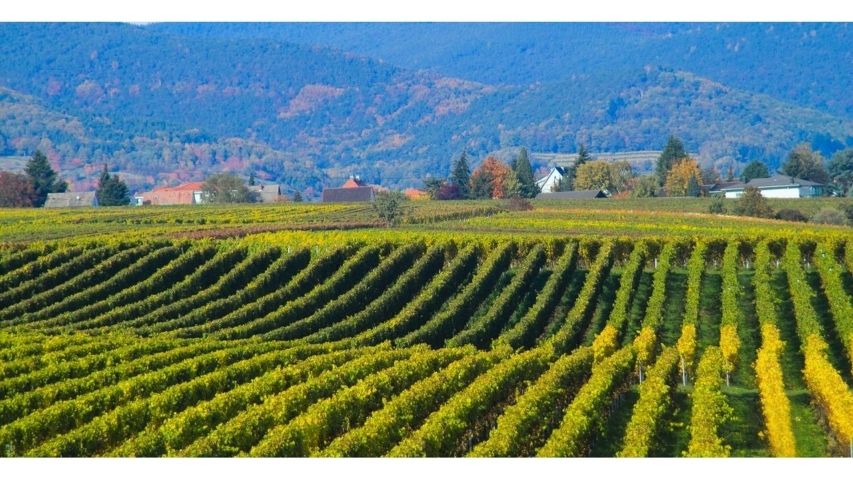 One typical touristy day can’t satisfy wine lovers. An entire trip needs to be devoted to it. But when work constraints came in, one had to be satisfied with a never to be forgotten day in the Kakheti region of Georgia, the cradle of Georgian wine. A Beautiful road to Kakheti from Tbilisi goes through the Gombori pass. The Schuchmann Château in Kisikhevi village hosted us.

One can also visit lesser-known Chateaux there too. Some welcome you in, provided you aren’t a journalist and you aren’t with a camera. We went to one such place. Not in the roadmap of tourists but a family that doesn’t want commercial forces ruining what is an exclusive family tradition. The bigger ones are off course, players in the export market of Georgian wine. The sun shone on the sprawling farms as we explored the wine production facilities and had a traditional lunch accompanied by the finest wines produced from famous Georgian grape varieties: Saperavi, Mtsvane and Kisi.

A very warm aspect of the entire trip was how Georgian and Indian cinema became a major part of the discussion along with the wine tasting. George the chauffeur for our excursions turned out to be a freelance editor and did work for a state sponsored channel and also for the Georgian Film Archives.

In the year following my visit I happened to watch the 2018 documentary titled ‘Our Blood is wine’. The documentary takes us to the heart of rural family life in the Republic of Georgia. The renaissance of the 8000-year-old winemaking tradition is explored. It had been buried somewhere during Soviet rule. It talks of how the country felt it had lost its identity with successive foreign invasions. The country has asserted its identity in the 21st century, through winemaking prominently, among other things.

There are several clips from the 1966 Georgian classic ‘Falling Leaves’ in this documentary - scenes of winemaking in the country. It was a ‘Soviet Georgia’ naturally and at a basic level the film illustrates the suppression of Georgian customs and rural traditions for the industrial winemaking by the Soviet regime.

Undoubtedly the western narrative has been beautifully sold to the world. While it’s true that Italian and French cultures are inextricably linked to their wines, in Georgia it has even deeper associations. It’s a pity that the World has been deprived of this understanding of the old and intimate relationship of Georgia to its wine. Things have started changing since the last five, six years. Books are being written (Alice Feiring, author of For the Love of Wine: My Odyssey Through the World’s Most Ancient Wine Culture), Wine from the birthplace of Stalin, is reaching wine malls in California.

Georgian wine making has been a household endeavor. It’s been about gene pools and about paternal and maternal grandparents and inheritances. My guide told me about how certain households insisted they liked a particular type of sweeter wine, because it was how a grandparent had liked it. It was in their blood. It is winemaking linked to faith, mythology and superstitions too. A famous legend that every tourist is told and with little or no variation, is how a piece of grapevine was woven into the chain mail protecting the soldier’s chests. The belief apparently was that after death it would ensure that vine sprang up from their bodies and their hearts. 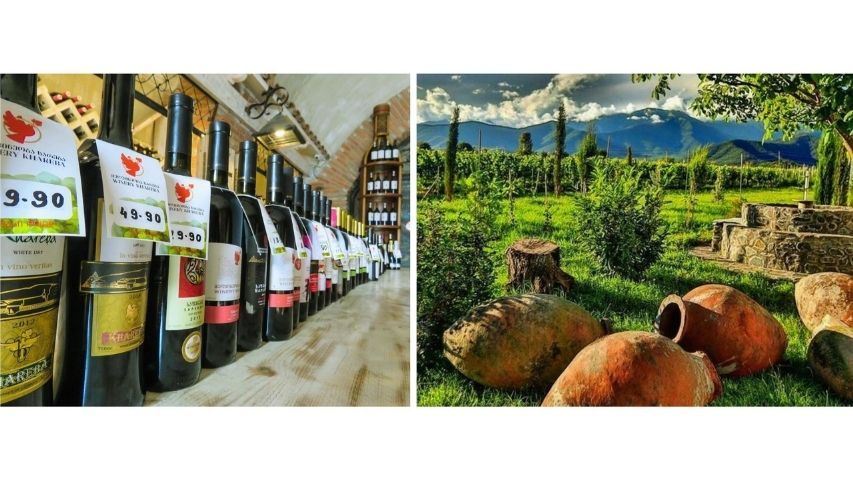 But convenient and dominant western narrative is just one of the reasons the Georgian wine hasn’t been known as the cradle of wine and hasn’t been able to dominate the world imagination and market. An important aspect has been geopolitical. Located between the Caspian and Black seas, winemaking wasn’t really promoted or made a priority under Soviet rule. Historic plantings were uprooted to make way for cheap factory wines. To top it all there was a Russian embargo on Georgian wine from 2006 to 2013.

They say that the wine tells you about how the people live in wine-centric cultures. I was regaled with wonderful stories. The working class and the middle class men generally settle down around the time of sunset to enjoy their wines. A lot of them don’t really work - their women do. Some of the liberated ones are willing to be homemakers as long as they can enjoy their wines. They would happily do the cooking, tending to the children, dropping them to school, laundry and the works rather than work in a departmental store or do white collared jobs. I laughed it off as exaggeration but kept wondering about the truth in it. Another Guide told me that her husband insists on her being home by sunset wherever she is taking tourists, unless it is a tour of a vineyard. All is forgiven when it is Georgian wine.

Despite being the birthplace of winemaking, Georgians seem resigned to their fate when it comes to world perception and marketing. They say they cannot compete with France, Spain, and Chile in terms of sheer volume. But what they do offer is their uniqueness, their grape varieties, Qvevri wine and their history. Qvevris are large lemon-shaped clay pots full of grape juice slowly fermenting.

Back home Odisha and West Bengal fought over the birthplace of the famous sweet ‘Rosogolla’. This wine origin battle hasn’t been fought legally and settled. It’s more in good fun that each country takes up a position where they claim origins and superior taste.

Some Georgians love Stalin and some detest him. Some are overtly into the Orthodox Christian church (a fallout of the communist suppression). Some continue to be atheists to the definition. No Georgian argues about the supreme position that wine holds in their country. I left the warm place with the sun kissed vineyards, evening nip and anecdotes that would remain, long after the wine bottles emptied out.

For me I was certain I wouldn’t take sides. French being a first love and all the passion with which wine flows in conversations and meals from textbook studies to cinema. Even an Emily in Paris is not without its chateaux and wines. Yet I was charmed by the laid back Georgians who boasted with an equal pride of theirs being the country of wine origin. Both were different claims, as different as their cultures. Think of high society celebrations and images of champagne popping come up.  French wine has been sold to the world of fine dining. Georgia is just coming to it’s own.

En route to the airport, the driver asked me “Indian? Hope you are carrying back wine?” And, he started rattling a list of the ones he hoped I had in my luggage. As he helped me with my luggage, his last words were, “Raj Kapoor and Nargis loved Georgian wines.”

Yes, the Georgians still have a thing for the Kapoor khandan!