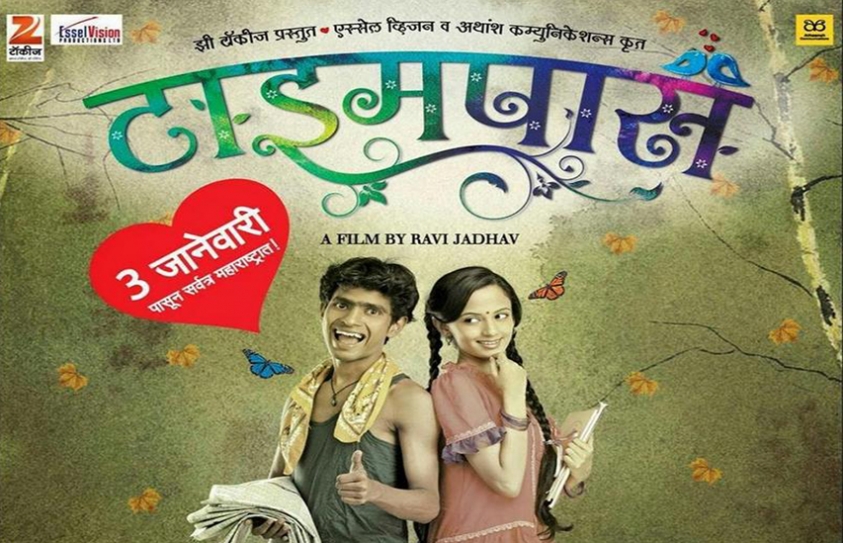 Time Pass – A Film Review More Of An Afterthought

The taste of first love, the age of innocence, the age old conflict and the nostalgia of it all, unfolds in a Marathi film loaded with honesty and heartfelt emotions. ?Time Pass?, a cute film which is hugely entertaining as well as universally articulate as it speaks in the language of ?love?.

The film subtly questions the notions about adolescent love:

Is falling in love, love, when you are at cusp of adulthood? Or is it just time pass?? Why can?t the innocence of love be understood by every ?graduate? generation rather than be objected since ages? Is a bigger question that it leaves as an after taste and ?stays back? in the hearts and minds of the ?full house? young audience which to my surprise in cinema halls (in Mumbai at least) prefer this movie over a film like Dhoom 3?? That?s the Power of young romance and good story telling craft.

Two innocent people belonging to contrasting strata of society fall uncontrollably in love for the girl?s chaste middle class value system represented by her father to squeeze the young dreams and aspirations forever.

The boy whose father drives an auto rickshaw is nailed at being where he ?belongs?; as the classic class/culture/religion ?disparity divide? mindset takes precedent over understanding purity of emotions; and the true worthiness of getting to know what it really means to the people involved!

But ?we are like that only? right? We reclaim seas to build cities; we eat up jungles to build our dwellings; we enjoy our riches while many die hungry?

We care and grow within the cultivated relationship sphere, anything outside is ?divorced?? ?amputated? ?aborted? without realizing the ?pain? that keeps screaming, becoming the ?seed? of? the young evolving life; letting it shape of? an aimless, ?amoebic? future, only to be condemned and silenced!

Yes the young need to be moulded, yes they need to be motivated for being focused to make great careers, but has anyone questioned why a bee is lured for the nectar that a young flower innocently and completely unaware. Offers? The cycle of falling in love and withering goes on everyday around us, do we ?hear? it??? Age is a Curse as well as a Boo. The choice is ours! It?s like the two sides of the ?same coin of life?! But as long as we forget to hear the inner voice of the ?child? that lives in all of us. We would never understand the meaning of it all!! That is the film?s subtext!

What makes us pragmatic about life and unreasonable about love?

?Truth? is so pure and fragile that unless handled by a mature hand. Its destiny is to break and shatter, and that?s where the young can go astray; if not given enough space or care.

Kabir once said: ?The river that flows in you also flows in me?. Then what has made us so ?dry? in not being able to feel the ?ripples of our young ones?? Have we lost our ?water? to become barren? Is it why we see so many conflicts ?bleeding? through news headlines around us these days?

What is Time pass?

Is corruption a product of time pass due to overflowing stomachs?? Is raping innocent young girls a ?manly timepass??? Are just few questions that come up when the world unites to stop innocence of love, which, even in the garb of ?timepass? is censored to be enjoyed as the illusion of love! In fact rapes happen because we curb the freedom of expression and do not allow a culture where gender equality is respected. Violence occurs due to unequal opportunities leaving a lot of young minds to be corrupted; and Timepass just assumes a new meaning! But that does not corrupt the emotion of love, which needs to be widely understood.

Time Pass is a film for the youth and the young. It is for the ?child? in all of us, to come alive once again and feel the ?love? that can transcend all conflicts; if not forever at least momentarily. Because we CAN ?live a life like an ocean in a moment? and we must realize that it?s not about the drop merging into the ocean but the truth is that it?s about the ocean, like experience merging into a drop!