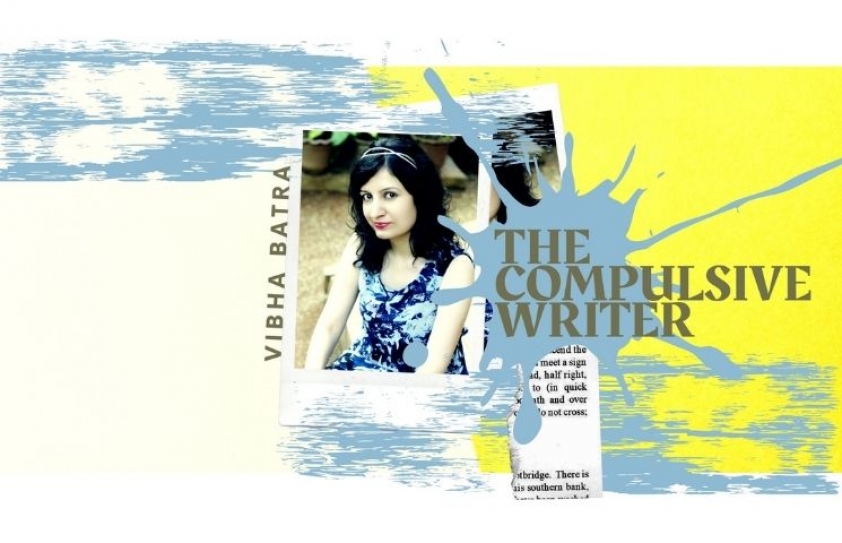 When you meet someone who has done so much work in such a short span of time, you cannot help but be intrigued, writes Vinta Nanda Here I reproduce a conversation that I had with Vibha Batra, along with an extract from her latest book for children, Pinkoo Shergill Pastry Chef, published by Scholastic.

Vibha Batra is a Chennai based author, graphic novelist, advertising consultant, poet, lyricist, translator, playwright, travel writer and columnist. She has published 17 books including The Secret Life of Debbie G (a graphic novel) Merry the Elephant’s Rainy Day, Bathinda to Bangkok, The Reluctant Debutante, The Dream Merchants, Keeping it Real, Euro Trip, Ludhiana to London, Glitter and Gloss, The Activist and The Capitalist, Sweet Sixteen (Yeah, Right!), Seventeen and Done (you Done!), Eighteen and Wiser (Not Quite!), Family Crossword, A Twist of Lime, Tongue in Cheek, and Ishaavaasya Upanishad: Knowledge and Action.

Several of her short plays have been staged during the Short and Sweet Theatre Festival South India. One of her plays was staged on the occasion of GST Day in Chennai. She wrote the Hindi lyrics for Thuppaki and has written the anthems for leading corporate houses like The Chola Group, Murugappa, Brakes India, GBS India, and Cavin Kare.

She has contributed short stories and poems to the Chicken Soup series, international anthologies, print magazines and ezines. She conducts creative writing workshops for children and adults at the British Council Chennai. She has been invited as a judge at renowned schools and colleges, and as a speaker at literature festivals and leading corporations. Her Sweet Sixteen trilogy published by Penguin has been optioned for screen adaptation by a leading production house. Over to Vibha Batra: 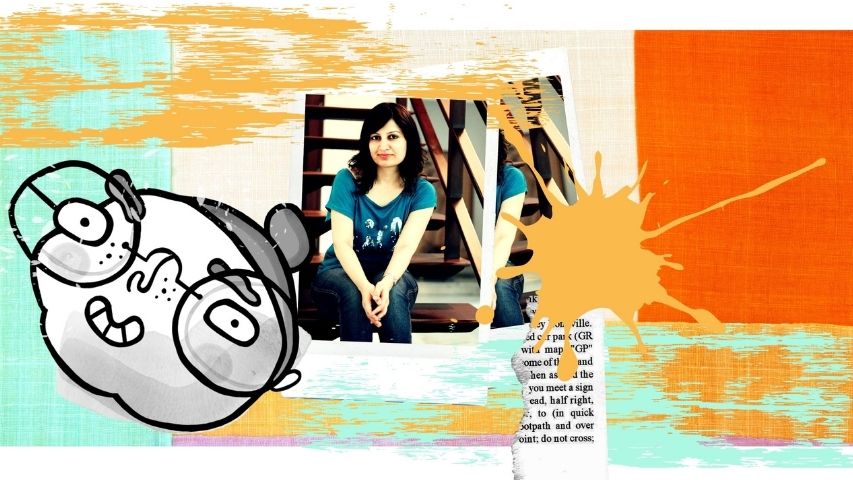 What made you a writer - as in what is driving you to write so consistently and often?

I’m a compulsive writer; I can’t ‘not’ write. Like everything in my life, I blame it on my genes. My maternal grandfather, the late Shri Vishnu Kant Shastri, was a prolific author, poet, academic and scholar. I grew up reading his memoirs, travelogues, and poetry. When he passed away, I decided to translate his book on the Ishaavaasya Upanishad into English - it was published by Rupa. And that’s how it all started.

You have a vast repertoire of published work to your credit and you also work as an advertising consultant - where do the two meet, and how do you manage both?

Not sure if I do! But working in advertising helped a great deal when I was starting out on my publishing journey. On several levels
it disciplined me (deadlines were not just things that made whooshing sounds above my head, much as I’d have liked them to be). It taught me how to write for the target audience. It prepared me for criticism (constructive and otherwise).

Tell us about your childhood and growing up years? The Daily Eye readers belong to creative communities largely and they are curious as well as inquisitive :)

My parents are avid readers. I grew up surrounded by books (and hailing from Kolkata, yummy food). Initially, all I wanted to do was eat and beat my cousins at poori eating competitions (was the reigning champ, too). But despite my best intentions, my parents’ love for books rubbed off on me. Soon, I was reading everything I could get my hands on (including shampoo labels, the terms and conditions sections of leaflets, and the newspapers wrapped around pakoras). Before I knew it, I was scribbling in notebooks, filling up journals, and even dashing off stories to Tinkle; still waiting to hear from them. On one fine day, I was so engrossed in doing one of the above; I forgot to eat (more than made up for it later).

From your first published work to the latest, what has the journey been like?

First book? Well, as I soon discovered, starting a book is one thing, but finishing it is quite another. So I did what the self-help books ask us to do: I announced to the whole wide world that I was translating my grandfather’s book on the Ishaavaasya Upanishad. After that, I couldn’t sit still for a second without family, friends, colleagues marching up to me and asking, ‘Why are you twiddling your thumbs, don’t you have a book to translate?’

Latest book? It happened juggling online school, homework, chores, and scrolling through my Instagram feed, assuring account executives at the ad agency, “Am sending the copy any minute now”.

Is having your work published an easy ride or does it involve struggle - do elaborate on the process?

Writing the book is the easy bit. Getting your dream publishers on board takes a while. I just keep putting my work out there (hoping and praying they love it as much as I do). But the toughest thing by far in marketing your book!

Who do you write for? Which is the primary audience you seek out for yourself and why?

I write for myself! When I’m writing, I’m totally in the zone. The overthinking happens later.

Where are you headed from here - as advertising professional and as a writer?

Pinkoo Shergill has a dream. He wants to be a pastry chef! But it's the world’s biggest secret. You see, his Papaji believes that boys shouldn't step into the kitchen or cook or bake. In fact, Papaji wants Pinkoo to become a shooting champ. Ack! But when the Great Junior Bake-a-Thon comes to town, Pinkoo has to come up with a WOWMAZING plan to make sure his blabbermouth cousin, Tutu, doesn't vomit everything to Papaji, win Nimrat - the Most Annoying Girl on the Planet - over and win the baking competition. Pheww! 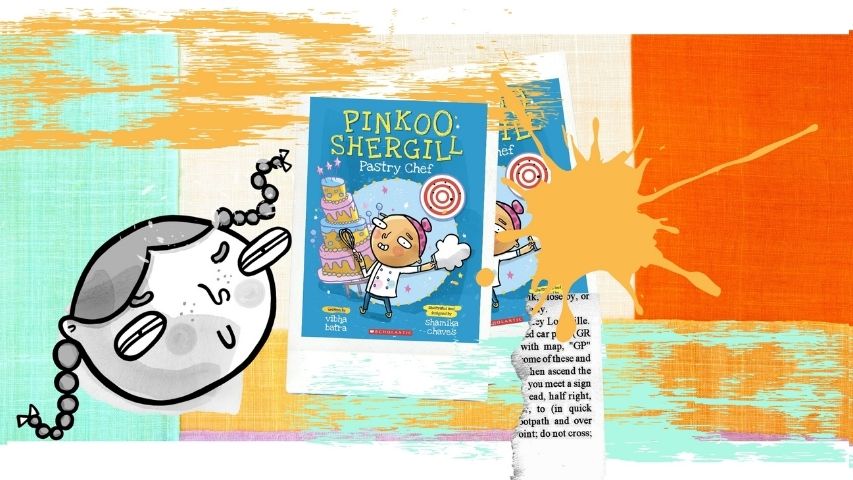 Mummyji was chanting his name, engaged in what appeared to be a wrestling match with the blankets (and at this point, the blankets seemed to be winning).

‘The boy has swaddled himself like an Egyptian mummy,’ she muttered, yanking off a blanket only to reveal another thicker blanket.

And who could blame Pinkoo. It was like the ice age in there. There were two fans and one AC in the room, all running on full blast.

(There were three reasons why he wanted his own room. This was Reason Number Two. He wanted to sleep like a normal human and

‘Come on, Sleepy Singh... you don’t want to be late again... there’s no time, no time at all...’ As Chachiji’s squeaky panicky voice drifted into Pinkoo’s ears, he burrowed deeper into the covers.

Meanwhile, Mummyji gave a hard tug, finally pulling the last blanket off him. ‘You have to be at the shooting academy in fifteen minutes.’

ARGHHHH! Shooting had shot down his favouritest dream. Once again.

‘But I don’t want to be at the shooting academy,’ Pinkoo protested, wresting back control of the blanket and pulling it over his head. Not in fifteen minutes, not ever, he added to himself.

‘Okay, fine, be like that...’ Mummyji trailed off, a warning note in her voice. ‘I know what to do.’

‘I say we hit him with my Nerf gun,’ suggested a little girl, her voice

as steady as her aim.

Pinkoo shivered under the blankets. It was Tikki, his cousin sister. She was almost six and already the most violent person in the entire history of the universe.

‘I’ve a better idea,’ Mummyji said, dropping her voice to a low whisper.

Under the covers, Pinkoo gritted his teeth. Tutu was one year his junior and one big pain in the neck. And he was also his roommate and Reason Number One. (Reason Number Three? He was almost ten. Surely, he needed – deserved - some privacy.)

Obeying Tayiji’s command like a well-trained Pomeranian, Tutu bounded out of the room.

Pinkoo waited. For Tutu to come galloping back, for the sheet to be rudely whipped away, for Mummyji to flip him onto his back, for an icy cold splash to hit his face. He steeled himself for the Arctic attack. It never did come, but Papaji’s steely voice sure did. ‘Pinkoo?’

That was all the motivation Pinkoo needed. PINNGGGGG! He cast the covers aside, leapt from the bed and dived straight into the washroom. All in one swift, seamless motion.

‘Like a bullet whizzing towards to its mark,’ Mummyji remarked, torn between admiration and exasperation.

‘Oh, shut up, Tutu,’ Pinkoo snapped from the other side of the door.

‘I was supposed to be visiting Mamaji, spending my holidays in Canada,’ he grumbled grouchily, as he emerged half-awake but fully dressed. ‘But here I am, waking up in the middle of the night, being dragged to that awful place, day after day. This is the WORST SUMMER EVER!’

‘It’s worse. To the power of infinity.’

‘It’s only for one more week,’ she consoled Pinkoo. ‘Then school will reopen...’

‘... And we will have to wake up early for school,’ he finished grimly.

‘What’s taking you so long?’ came Papaji’s papad-crisp voice. ‘Are you coming?’