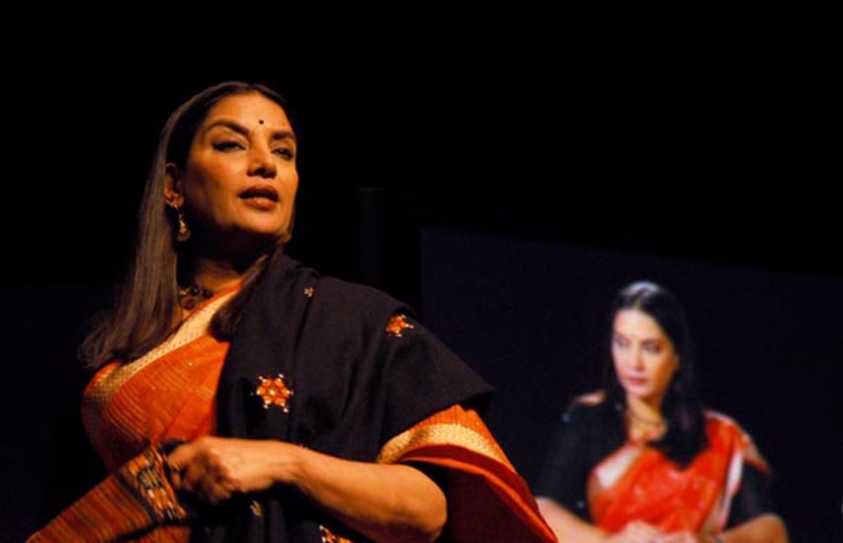 For an accomplished actor like her, performing solo on stage is not such a problem, but in this case she has to coordinate with her own pre-recorded monologue on a TV monitor, so her timing has to be perfect.

Theatre legend has it, that she had once done an impromptu Hindi translation of the play on stage, in a North Indian when there was a demand for speaking in Hindi.

Going it alone on stage is a challenge for any actor, trying to grab, and hold, the attention of the audience for over an hour, hoping they don’t get bored god forbid if a line is forgotten, there’s nobody to help cover up. And because it is so frightening and thrilling, for actors who attempt it, the high is stronger than any narcotic. For the playwright and director it is a test of their skills—can they cut the fat off a script and present the essence of an idea, using just the actor’s voice and body to convey it.

There have been some memorable one-actors on the Mumbai stage in the recent past. Ira Dubey’s 9 Parts of Desire (discussed in an earlier column) is a fine example of the power of one. Manoj Shah decided to explore this tough format and recently did two solo actor plays in Gujarati—Karl Marx in Kalbadevi with Satchit Puranik and Hun Chandrakant Bakshi, with Pratik Gandhi. The first written by Uttam Gada is an imagined piece on what would happen if the spirit of Marx visited the hub of capitalism, Mumbai’s Kalbadevi. The second written by Shishir Ramavat is about the well known Gujarati writer, who lived and wrote on his own terms. Surprisingly, Gujarati audiences, habituated to family dramas, were willing to give these two a fair chance.

Naseeruddin Shah did Einstein a couple of years back—and looked like the wild-haired scientist; Pankaj Kapur wrote and directed and performed the charming Dopehri, while Anupam Kher has famously brought his autobiography on stage as Kuchch Bhi Ho Sakta Hai.


Performing solo on stage is a tradition in folk forms—particularly dramatic enactments of stories from the epics. In contemporary theatre, without the easy props of familiarity and the support of music and dance, the monologue has created its own place. And this does include stand-up comedy in which the performer is almost always alone on stage.

A skilled actor, who is able to entrance the audience, can make each person in the theatre feel that he/she has a special connect to the character on stage. It is not a simple feat to pull off, and if the actor forgets a line, there is nobody else on stage to help them cover up. Somewhat like walking the tightrope without a safety net.