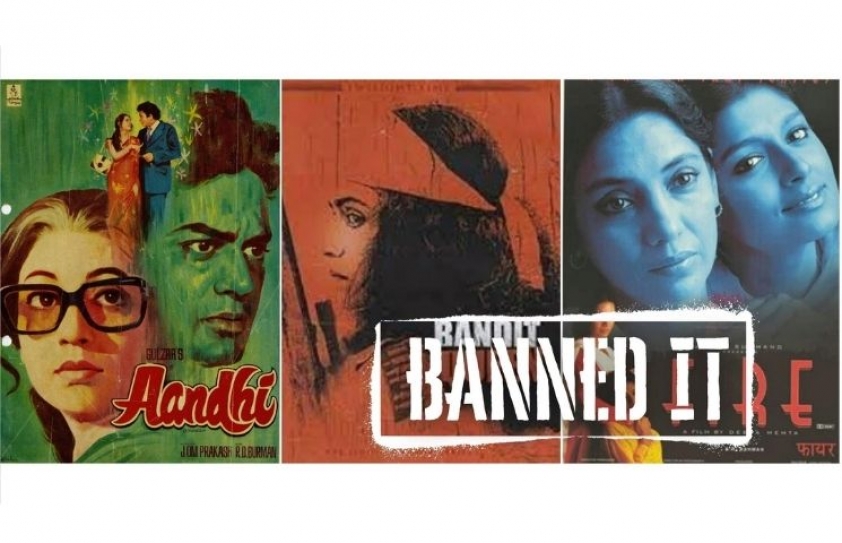 Anyone who follows Bollywood is well versed with the issues of censorship and its controversies. Once, an Examining Committee after seeing the films was required to give its verdict on the category the film should be given for public exhibition. There were only two types of certificates, which were: ‘U’ that meant: for general unrestricted public release, and ‘A’, that meant: for Adults Only.

At times, the censors would unanimously ban a film owing to its content, based on the guidelines. Countless producers and directors who felt that the censors have been harsh on their labour of love, by either refusing it a certificate or confining it to a restricted category, or even demanding unfair cuts, followed up with an appeal and the film would be reviewed by a Revising Committee.

Although due to the OTT platforms content has changed drastically and the criteria for banning a film today seems outdated, there was a time when a number of films raised eyebrows and set a buzz around them because they were banned. Eventually, they would be release but after alterations and edits.

It’s not possible to discuss each one of them here, but here’s a recap of 11 films, which were banned initially. 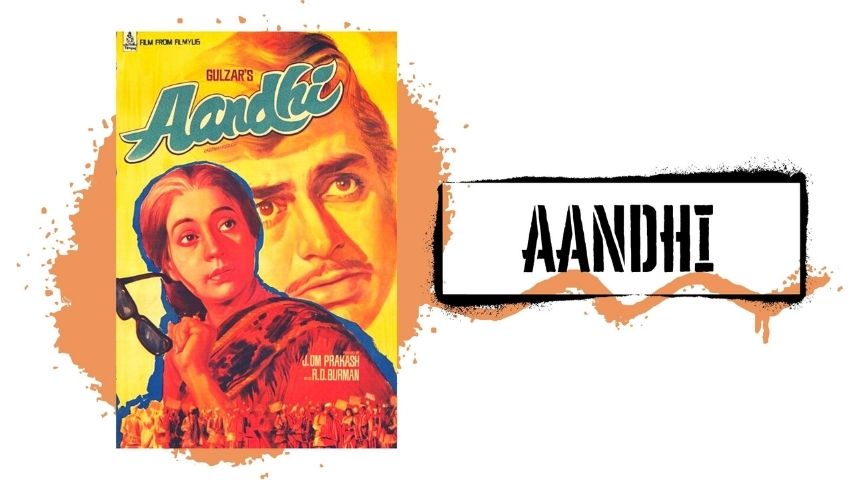 A political drama starring Sanjeev Kumar, Suchitra Sen and Rehman, Gulzar directed it with music by R.D. Burman. Cleared at the onset, soon there were murmurs that it was based on the life of then Prime Minister Mrs. Indira Gandhi and her relationship with her estranged husband. In fact, Mrs. Gandhi inspired just the look of leading actress Suchitra Sen.

Be that as it may, Aandhi was banned during the National Emergency in 1975, a few months after its release, on the grounds alleging violation of the Model Code of Conduct during elections, claiming it will damaged the credentials of the Congress Party. Eventually, it was re-released in 1977. Today, it is rated as one of the most perceptive accounts of a woman politician’s personal life. Suchitra Sen never returned to Bombay cinema after that. 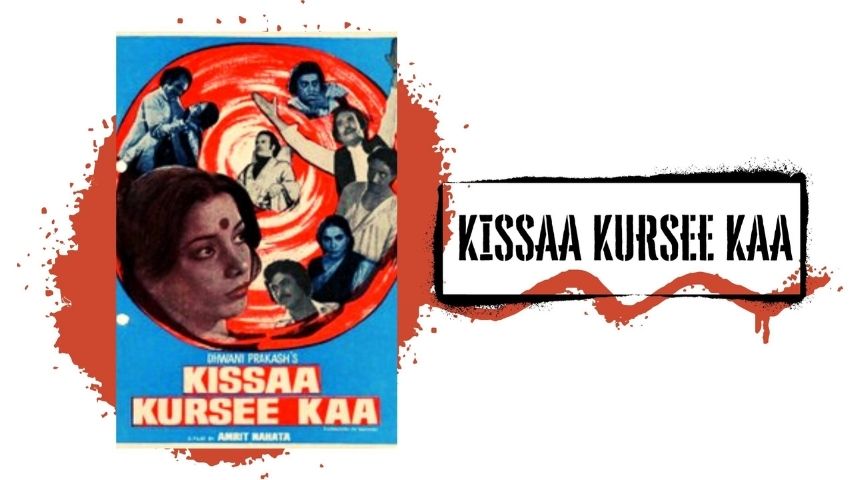 A political satire on the politics of Mrs. Indira Gandhi and her son Sanjay was immediately banned by the Congress during the emergency and its reels were confiscated; it is said even destroyed against the decision of the Supreme Court to keep its print intact. It was remade featuring Shabana Azmi, Raj Kiran, Manohar Singh, Katy Mirza and Utpal Dutt in prominent roles. The music was by Jaidev. Raj Babbar was a part of the first version, which was destroyed. Director Amrit Nahata remade the film with Raj Kiran in 1977 and released it after the Emergency was lifted. Rehana Sultan was cast in the first version. Surekha Sikri replaced her in the remake.

Ironically, Amrit Nahata subsequently joined the Congress and disowned the film. He became a member of the Lok Sabha for three terms thereafter. 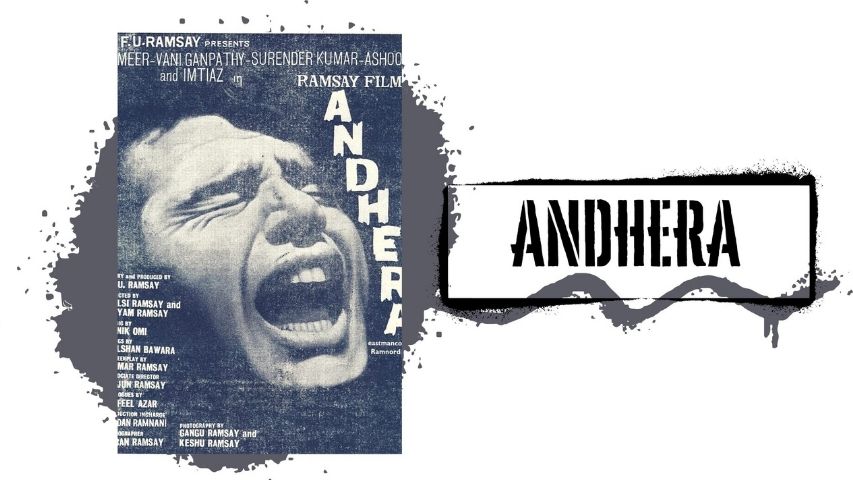 From the House of Horrors of the Ramsay Brothers, Andhera was made around 1974-1975 but was entangled in legal issues. The cast comprised Sameer Khan (brother of Feroz, Sanjay and Akbar Khan) opposite Miss India title winner Vani Ganapathy (the ex-wife of Kamal Hassan), along with Imtiaz Khan, Surender Kumar, Tun Tun and Helen. The music was by Sonik Omi.

The film was inspired by the Hollywood film titled Boston Strangler (1968) - and it was not the typical horror fest for which the Ramsays were famous. Rather it was a violent saga of revenge. The censor board however felt otherwise. According to them it depicted too much cruelty, torture and violence. There was a lengthy steamy scene, which they shortened. The Ramsays fought a long battle in court, which kept the film on hold for a couple of years. Finally, it was released around 1978-79 with major cuts and it tanked at the box-office. The Ramsays entertained the audiences with their dark and edgy sagas but frequently incurred the wrath of the scissor hand censors. 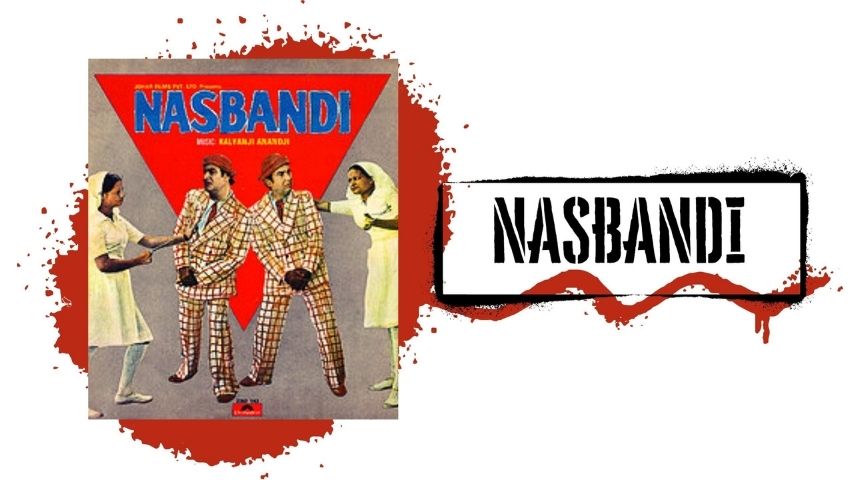 The much-publicised comedy was produced and directed by comedian I.S. Johar and was based on the sterilisation program of the Congress regime during the Emergency. It starred I.S. Johar and his daughter Ambika Johar, Manorama, Tun Tun, Rajendranath, Leela Mishra, Anwar Hussain and Jeevan, along with the duplicates of all the top heroes of that era. The film was banned for obvious reasons. Later, however, it achieved cult popularity because of the marketing of its videocassettes. The ban was lifted once the government changed. 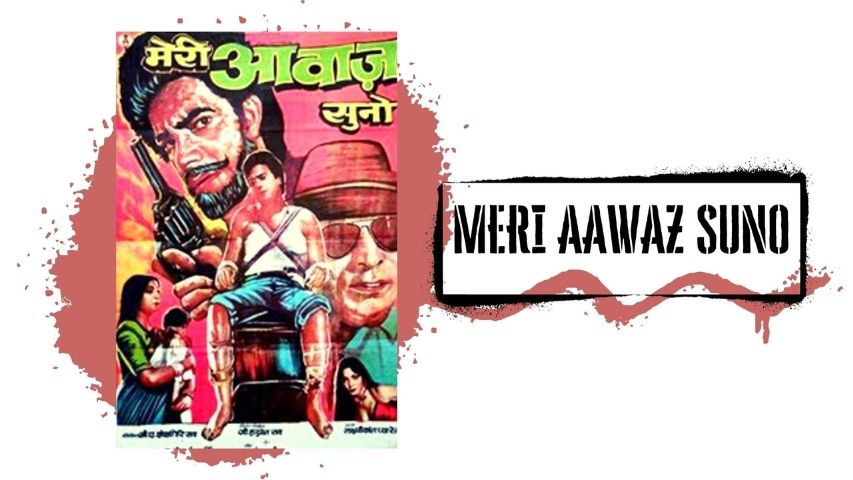 The action thriller produced by G. Hanumantha Rao for Padmalaya Studios, featured Jeetendra, Hema Malini, Parveen Babi, Tamanna, Kadar Khan, Shakti Kapoor, Ranjeet and Asrani. It was a remake of the Kannada blockbuster Antha (1981). Meri Awaaz Suno created waves before its release since the censors were against certain scenes. A day after its release the central government banned it despite its Adults Only certificate, for offending the guidelines of cruelty and vulgarity besides one semi-nude scene.

Curiously, the step taken by the central government to ban the ‘A certified’ film was unprecedented, that too after a fortnight of its release. After a few days, the ban was lifted and it became a stupendous commercial success. The film is said to have smashed the box-office records of Sholay in some small-town centres. It proved to be one of Jeetendra’s biggest solo hits. 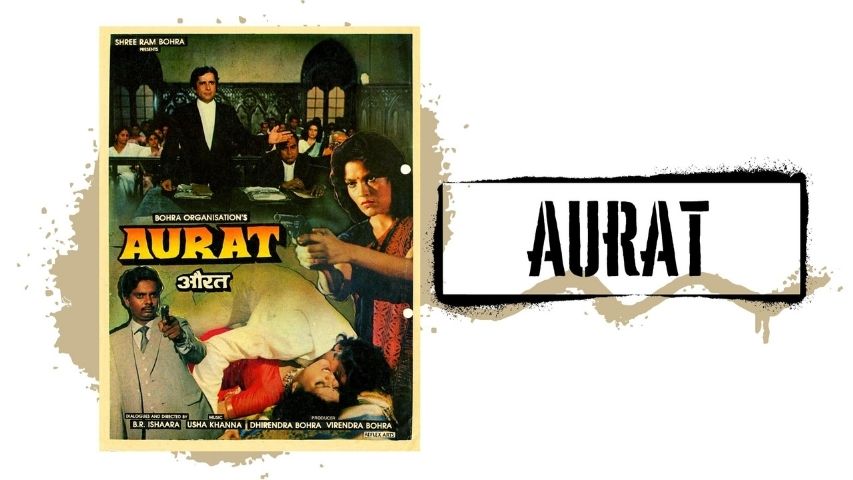 Most of the sexually frank films directed by B.R. Ishaara were controversial and faced censorship issues. This one starring Zeenat Aman, Shashi Kapoor, Sudhir Dalvi, Sadashiv Amrapurkar, Mazhar Khan, Viju Khote and Shakti Kapoor was launched in 1981 immediately after the success of B.R. Chopra’s Insaaf Ka Tarazu (1980). It was meant to be a quickie to cash in on the popularity of Zeenat Aman, but was stuck for as many as five years. The plot concerned a woman’s revenge against her rapists and the killers of her family. The Examining Committee flatly refused to issue a certificate to the film, citing far too many scenes as ‘objectionable’. The rape scenes were lengthy and bold according to them. Finally it saw the light of day after almost 400 feet of the film were cut along with an Adults Only certificate in 1986. The outcome tanked since it looked outdated and incomplete. 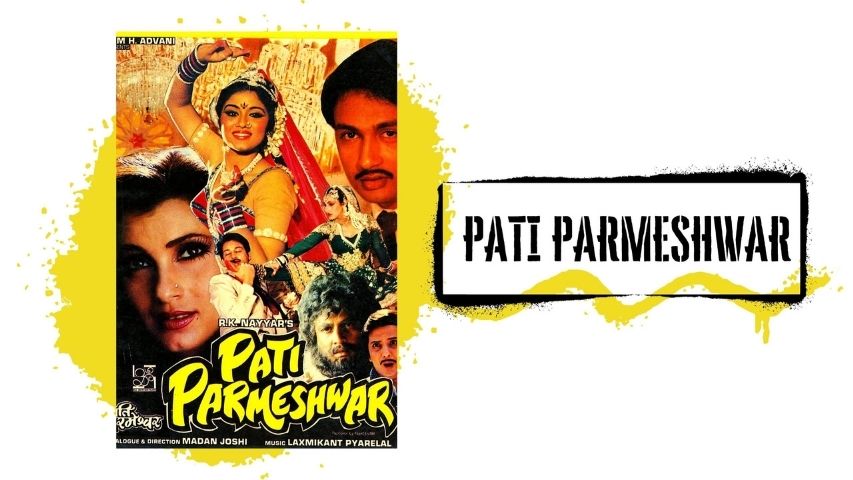 Directed by Madan Joshi and produced by R.K. Nayyar and his wife Sadhana Nayyar, Pati Parmeshwar starring Shekhar Suman, Dimple Kapadia, Sudha Chandran and went through hoops with the censors. Nayyar released the film after two years but not before a court battle with The Central Board of Film Certification (CBFC). The censors had thumbed down the film as they felt it was regressive and it glorified submissiveness of a devoted wife, Rekha, giving in to harassment and torture of her husband and in-laws, The husband was shown to spend most of his time and money on his mistress (played by the gorgeous Dimple Kapadia). When he meets with an accident the wife puts him in a wheelchair and takes him to the mistress to make his happy, which the committee felt was beyond belief. The delayed release of the film took a toll on the health of the producers. Plus it bombed at the ticket counters. 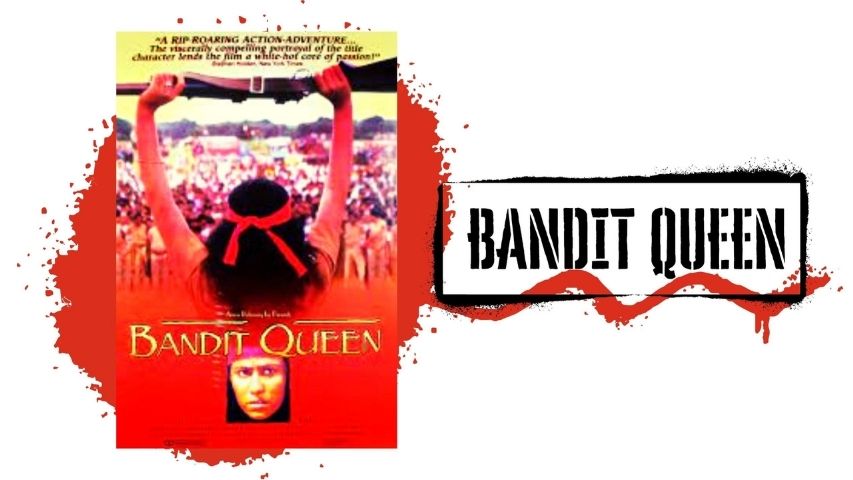 Here was a biographical film on the life of Phoolan Devi, the dacoit who became a human rights activist eventually. Even though this film was hard hitting and praised by the critics, Phoolan Devi herself was furious and tried to stop its release. She demanded 40,000 British pounds in lieu of the damage done to her story. Director Shekhar Kapoor was accused of exploiting her trauma by recreating her rape on screen while she was still alive.  It was written, produced and directed by Shekhar Kapoor and headlined Seema Biswas, Nirmal Panday, Manoj Bajpayee and Aniruddh Agarwal. 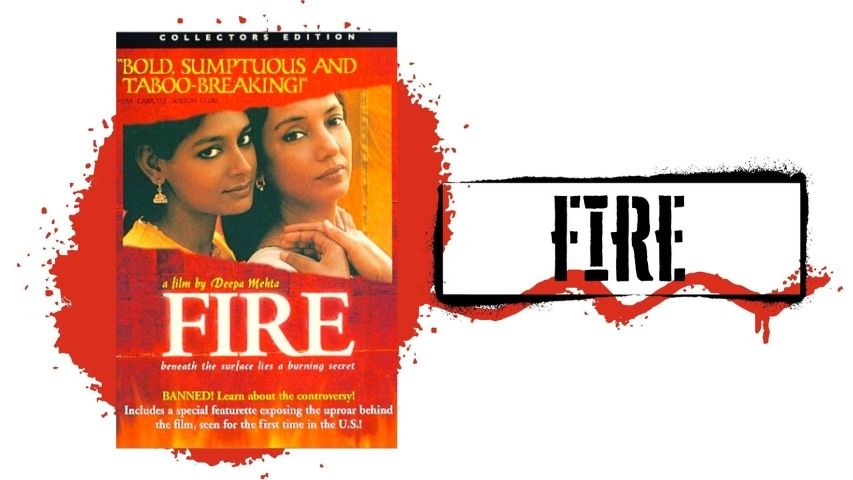 Directed by Deepa Mehta, it was inspired by the Urdu short story ‘Lihaaf’ by author Ismat Chughtai. Spotlighting, Shabana Azmi and Nandita Das, it deals with a complex same-gender relationship between two daughters-in-law of a family, Radha and Seeta, who seek solace in each other. On its release in Mumbai’s New Empire theatre, it was stormed by the men of the party in power who protested because they believed it to be against the institution of marriage.

Similar incidents followed in other towns. Hence the film was banned from but eventually released due to the intervention of the then chief of censor board, Asha Parekh. Today, it is available on the OTT platforms. A similar fate befell Deepa Mehta’s Water (2005) set in 1938, which was based on the widows of Varanasi. It starred Seema Biswas, Lisa Ray, John Abraham and Manorama. 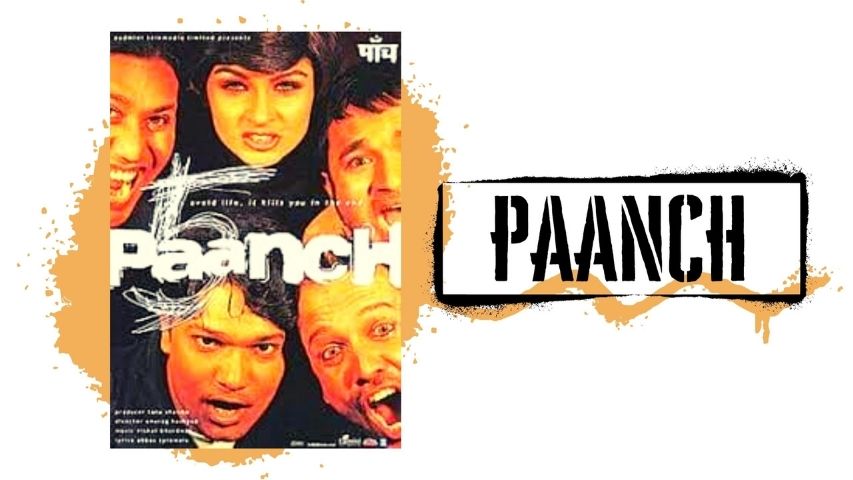 Written and directed by Anurag Kashyap, it was the home production of actress Padmini Kolhapure and her husband Tutu Sharma. Starring Kay Kay Menon, Aditya Srivastava, Vijay Maurya, Joy Fernandes and Tejaswini Kolhapure, the plot was loosely based on the Joshi-Abhyankar murders of Pune (1976-77). It never managed to get a theatrical or a home video release as the Central Board of Film Certification had objected to the violence, drug abuse and offensive language. But it was screened at various festivals where it was appreciated. 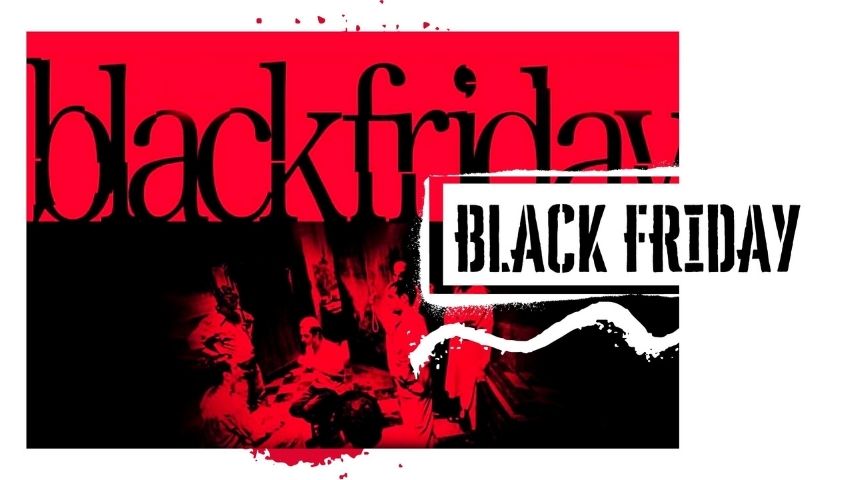 Based on the book by Hussain Zaidi, Black Friday – The true story of Bombay Bomb Blasts, Anurag Kashyap directed this no-holds-barred film, which was banned by the courts at the last minute. Black Friday featured Kay Kay Menon, Pawan Malhotra, Aditya Srivastav, Zakhir Hussain, Gajraj Rao and Kishore Kadam in prominent roles. Eventually, the film was released after about a period of two years but by then the brouhaha about it had died down.

However, now of course, films released on streaming channels don’t have to go through the acid test of the censors. Periodically, though, there have been announcements that OTT channels will be subjected to inspection too. But haven’t we grown-up to make up our own minds about what to see and what to avoid?