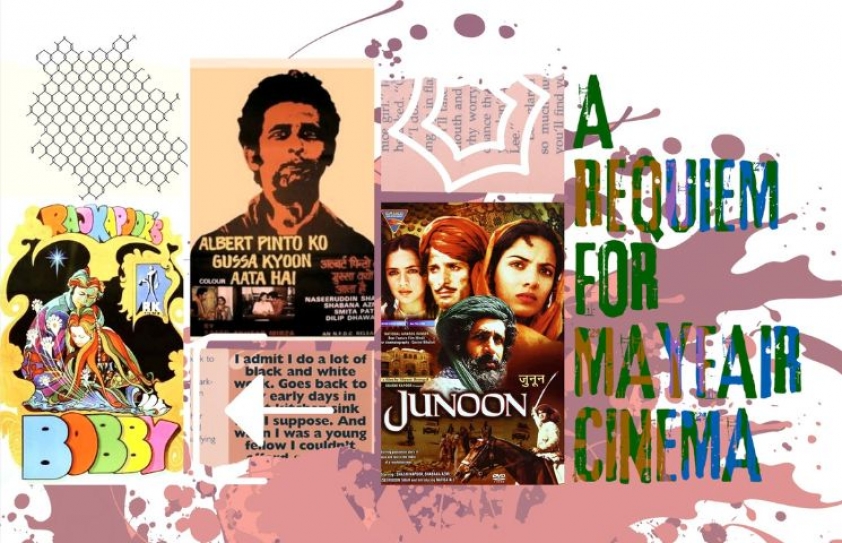 A Requiem For Mayfair Cinema

English movies which essentially meant Hollywood films (Hollywood being the benchmark for “good cinema” catering to the English-speaking elite of city of the nawabs) were scarce in the Lucknow (capital city of north Indian state of Uttar Pradesh, India) of the seventies and eighties, writes Sharad Raj.

They were mostly Sunday morning affairs with comedies of Laurel & Hardy and Charlie Chaplin films and our school or parents would take us from time to time. These were obviously considered as films meant for the kids, apart from ‘It’s Hot in Paradise’ and ‘Blow Hot Blow Cold’, a 1969 Italian film dubbed in English promoted as a “sex film”, which ran perennially in Capitol and Odeon cinemas along with Seema and Sasi’s Her Nights, a Malayalam film again peddled as a “sex film.”

English movies apart from these were conspicuous by their absence. Though my parents did tell me about some wonderful English films they had seen during their medical college days, like Roman Holiday, Ten Commandments, Ben-Hur and The Wind Cannot Read, amongst others.

All these films were released in this landmark theatre called Mayfair in the heart of the Hazratganj market, the poshest in Lucknow. Mayfair was housed in a very high brow building along with three other landmarks of Lucknow: The British Council Library, Kwality’s, the restaurant that served sizzlers and mutton roast and Tutti Frutti ice-cream, and last but not the least one of the greatest book shops ever, Ram Advani Booksellers. Ram and Darshi aunty with their stiff upper lips were steeped in colonial culture, where they would whisper and not talk and 7pm used to be supper time. But both were extremely warm and generous towards their friends. I can proudly say that I was pampered by Ram uncle a lot.

The sheer aura of these places in the Lucknow of yore was further magnified with the air-conditioned theatre (a rarity in those days) called the Mayfair, that this building housed. It was just that elitist cherry, which this most attractive complex needed. My first memory of Mayfair is watching all the Laurel & Hardy and Chaplin films, but the real big screen experience was watching Steven Spielberg’s Jaws (1975). Even today when I take a class on Jaws, I try to conjure the experience of watching the killer shark open its big mouth on the big screen. Mayfair was the picture hall and as a 10-year-old I had shrieked and jumped on my seat.

It was my maternal grandmother, late Mrs. Bhuvaneshwari Saxena, a woman far ahead of her times and a master with Hindi grammar, who had taken me to see Jaws. She had introduced me to Hollywood and Satyajit Ray’s Sonar Kella. Jaws was the beginning of my tryst with Mayfair Cinema in the real sense and Nani’s visit would ensure a trip to this prestigious movie hall. We saw films like The Towering Inferno and Poseidon Adventure there.

This legendary cinema hall, an integral part of our growing years and the legacy of Lucknow had a well-respected, extremely stern, and strict Manager, who we called Kumar uncle, and his son was our batchmate. Kumar uncle had a tough job. To begin with Lucknow University was always a notorious hub of caste violence and hooliganism, which back in the days when there was little understanding of the grassroot realities, was looked down upon by the educated class. The university students were no less, there are many stories of them damaging property of Mayfair Cinema and other places. Uncle Kumar had to protect his elite clientele from them. Since most English films were adult films, he had to ensure, over and above the ushers, that no underage boy or girl entered the theatre when the film was an ‘A’ certificate film.

He was otherwise cordial but serious and often helped our family by issuing "manager quota" tickets. The manager of every cinema hall used to keep a few tickets despite the house full board to oblige important city people like lawyers, doctors, IAS officers, defence personnel, professors etc. So Kumar uncle many times would oblige us. Since in the seventies and eighties almost everyone in the city knew each other, Kumar uncle was acquainted with all of us, by face if not name. This became a big crisis when Brooke Shield’s The Blue Lagoon was released in 1980. I was fifteen years old.

My friend Pavan Wadhwa and I were determined to see the film, but it was an adult film, so circumventing Kumar uncle and getting parental approval was difficult. My mother flatly refused to grant permission. Somehow, I knew I could give my father some spiel on adolescence and awakening and get his approval. Lo and behold, it worked and he promised to speak to mom. With me permitted, Pavan was obviously allowed as our families even today are close. 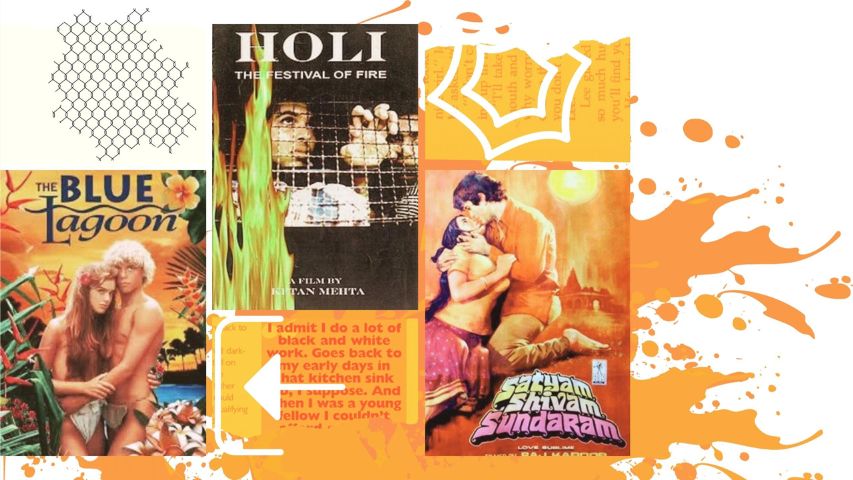 But the big challenge was bypassing Kumar uncle. Parents were clear that they will not put in a word and that we would need to seek his permission to enter the theatre. It was easier said than done. Kumar uncle was standing right at the theatre entrance in his trade mark coat and pant. We spoke to him feebly, were denied and it was certain we will never be allowed to see the greatest teenage film, The Blue Lagoon, ever. Poor Brooke!!! Sometimes I think dad gave permission because he knew Kumar uncle will not let us enter, so why defy a teenager and upset him.

But luck was with us. Those days in English movies the interval used to be at the beginning. The chronology used to be: movie trailers and advertisement films, followed by an interval post after which the movie would start and be shown without a break.

Once the trailers started, and the auditorium lights went off, Kumar uncle lowered his guard and went to his office. Then the interval happened. Pavan and I were almost in tears as it was certain that we will not be watching the film. Just then a family friend with his sons much older to us emerged. They were sitting in the dress circle, which was then a ground floor level class and we had tickets for the Balcony, which was the first-floor category. When he saw us, he asked us why we were standing there? Finally, it was him who came up with a ploy. Since their tickets were already checked and torn by the usher, maybe if no one notices we would be allowed in. Seemed like a plan. He took our un-torn tickets and gave us his and we proudly flaunted our torn tickets so that no one questioned us and slipped into the auditorium to watch The Blue Lagoon. This was the feel and aura of not just the building and reputation of Mayfair Cinema but also of its chief guardian Kumar uncle. He had a huge role to play in the “exclusive” persona of Mayfair. After that, escaping Kumar uncle was honed into an art form!!!

Known only for English films, until Kamal Amrohi’s Pakeezah (1972)  was followed by Raj Kapoor’s Bobby(1973), Mayfair continued to play Hollywood films but select Hindi movies as well would find a release every now and then. The Hindi New wave was one privileged lot. I think my parents saw a whole lot of early Shyam Benegal there. I myself saw his Junoon (1978), followed by Saeed Akhtar Mirza’s Albert Pinto ko Gussa Kyun Aata Hai (1980), Ketan Mehta’s Holi (1984), Aparna Sen’s 36 Chowringee Lane (1981), Benegal’s Kalyug (1981) and Mani Kaul’s Sateh se Uthta Aadmi (1980). Perhaps the target audience of these films and Hollywood was similar, both catered to the English speaking educated middle classes. The lobby of Mayfair, showcased pictures of great American stars and actors and the hallway had huge movie posters framed in occidental frames. I clearly remember seeing a huge poster of Meryl Steep’s The French Lieutenant’s Woman, proudly displayed in the Mayfair hallway. That was the first time I got to know about Meryl Streep. Going to Mayfair was not just about watching a movie, it was an experience.

However, once Raj Kapoor got a taste of Mayfair with Bobby, he also released Satyam Shivam Sundaram there. In fact, B movies like Randhir Kapoor’s Ponga Pandit (1975) were also, rather surprisingly, released in Mayfair, which many saw as the beginning of its downfall. Many years later the British Council Library shut down, Kwality Restaurant fell from grace and closed its doors, Ram uncle passed away and his bookshop withered away slowly, and Mayfair too was shut down.

Today, the lobby of Mayfair wears a deserted look. No one knows where Kumar uncle is. It is a sad sight but still the complex reminds us of some elegant times gone by, whether it was food, books, or cinema.

Mayfair movie hall and complex will remain a symbol of Lucknow’s colonial legacy and feudal past, which was laden with poetry, art, culture, theatre, academia and cinema and subsumed by Neo-liberal culture.