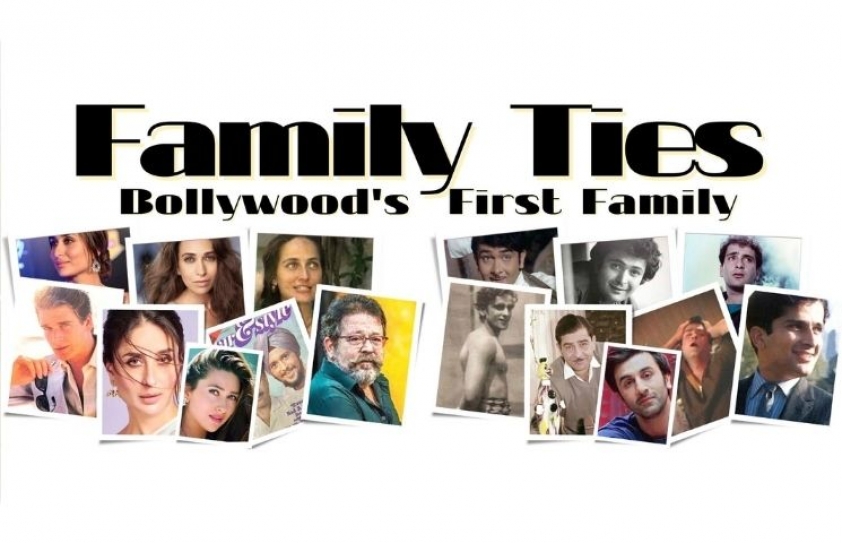 Business culture, work environments are usually based on hierarchies, which tend to be of vertical nature in India. Initially, it was an understood notion that children from a business family were expected to follow the path charted out for them. Bollywood has been no different. Stellar names have pursued the métier of the parents, to establish their own distinct identities and style.

Today, I salute the most extraordinary family, which has held us captivated us for generations: 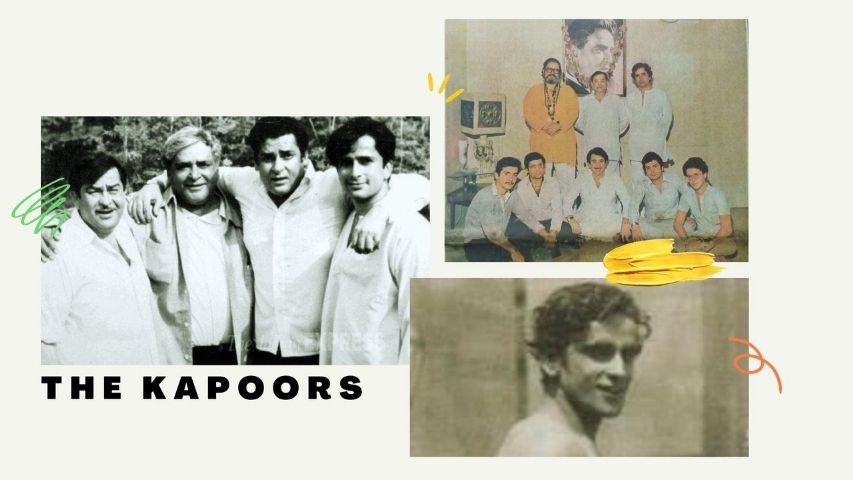 Five generations of The First Family of Indian Cinema have lit up our lives in so many different ways, for a century and some more. Different members of the family, both biological as well as those married into the clan, have been a constant. Patriarch Prithviraj Kapoor kick started his career in film and theatre, circa 1928. He was a part of the first talkie film Alam Ara (1931). His sons too were greatly successful in taking the family business forward. Ditto his grandchildren.

This week I saw Randhir Kapoor turn 75 years old, a momentous occasion for the family of entertainers, which has always believed in the credo that the show must go on. 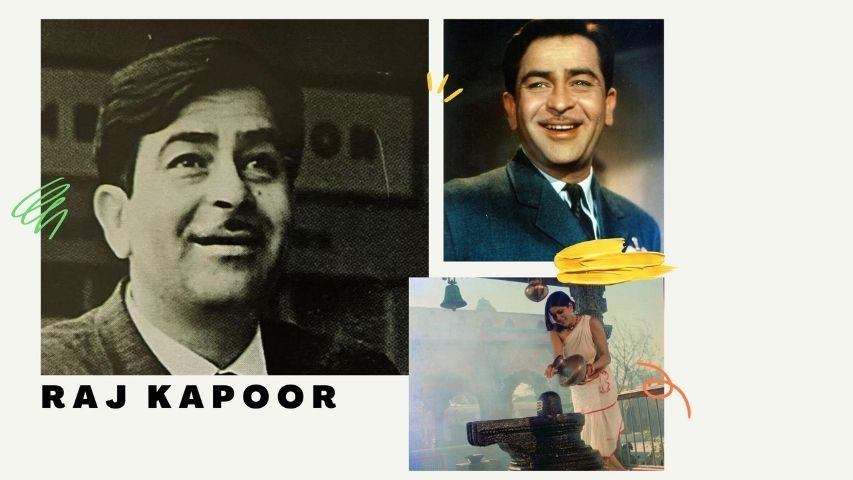 The eldest son of Prithviraj Kapoor, Ranbir Raj was born in Peshawar (now in Pakistan). He appeared in Inquilab (1935) as a child artiste while his big break came as Neel Kamal (1947) opposite Madhubala. While acting, at the age of 24, he founded the R.K. Studio in Chembur (Bombay). The youngest director of his time, with Aag (1948), he went on to produce and direct many hit films under his banner: Awara (1951), Shree 420 (1955), Jagte Raho (1956), Mera Naam Joker (1970), which fared poorly initially but became a cult film with time, Bobby (1973), Satyam Shivam Sundaram (1978), Prem Rog (1982) and Ram Teri Ganga Maili (1985). He was the undisputed showman of the industry, adored all over the world. He was married to Krishna Malhotra, the sister of actor Premnath. 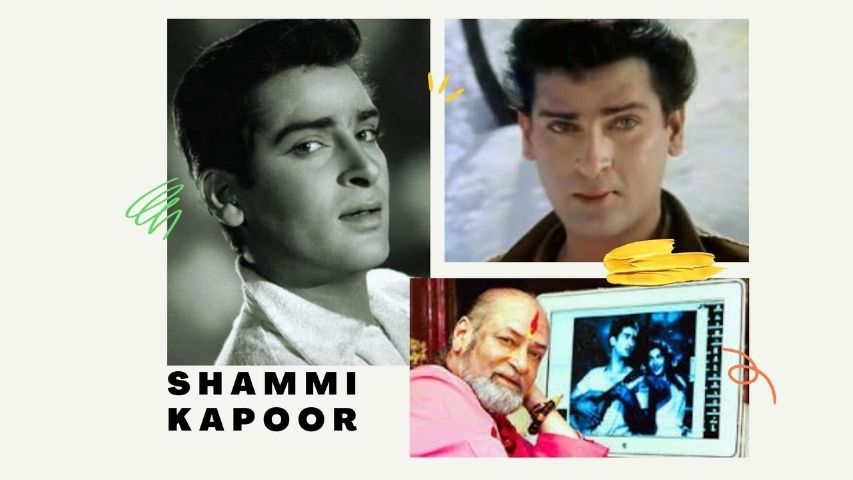 The younger sibling of Raj Kapoor, Shamsheer Raj Kapoor made his debut in Jeevan Jyoti (1953) and Gul Sanobar in the same year. Followed Laila Majnu (1953) and Mehbooba (1954) but both failed to garner him an immediate fan base.

With the advent of age, he made his mark in character roles in films like Parvarish (1977), Mama Bhanja (1977), Shalimar (1978), Harjaiee, Professor Pyarelal, Armaan and Ahista Ahista all in 1981, Desh Premee, Prem Rog, Yeh Vaada Raha, Vidhaata and Romance in 1982, and Batwara, Daata and Ajooba in 1989. He was married to actress Geeta Bali who in 1965 passed away due to smallpox. Subsequently, he married Neila Devi in 1969. 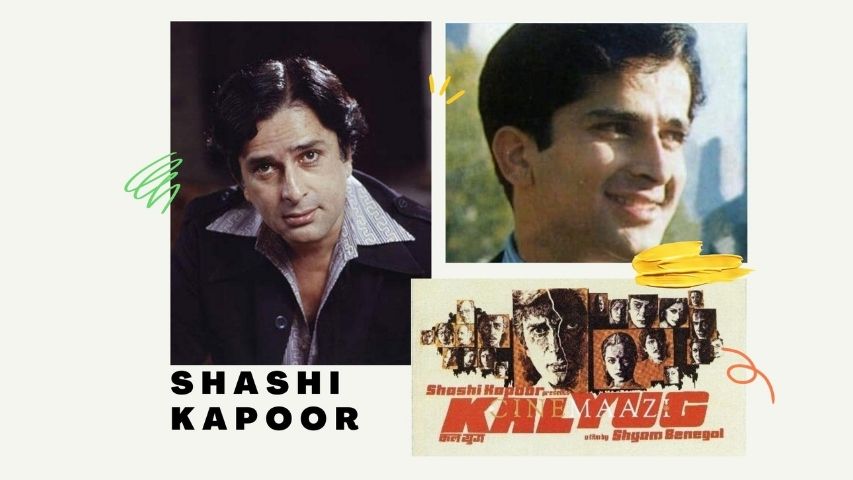 Balbir Raj Kapoor aka Shashi Kapoor was the youngest and the most suave among the brothers. As a child artiste, he made scene-stealing cameos in Raj Kapoor’s directorial Aag (1948) and Awaara (1951). 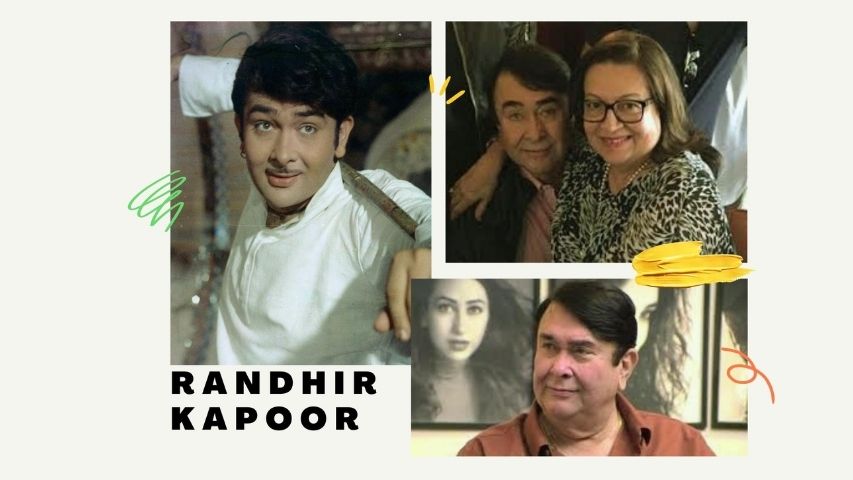 The eldest son of Raj Kapoor, Randhir Raj Kapoor began his career as a child artiste in Shree 420 (1955) and Do Ustaad (1959). He graduated to lead parts with Kal Aaj Aur Kal (1971), which also was his directorial debut. Hits followed: Jeet, Rampur Ka Lakshman and Jawani Diwani all in 1972. In 1975 he directed Dharam Karam, which tanked at the box office.

Successful films like Haath Ki Safai (1974), Ponga Pandit (1975), Chacha Bhatija (1977), Kaasme Vaade and Heeralal Pannalal (1978), Biwi-o-Biwi, Dhongee (1979), Harjaee (1981) and Pukar (1983) are some of his well-remembered films as an actor with a comedic touch. He was lucky to have the maximum hit songs to his credit, R.D. Burman was his personal friend. His forte were light-hearted roles; he would often be seen as a village bumpkin. He had an excellent flair for comedy, which can be ascribed to his sense of humor, he’s known for in filmdom. He was also seen in a comical, character role in the Housefull series. He directed Henna (1991) and fulfilled his father’s dream project. He had married his co-star, Babita Shivdasani, but eventually they separated. 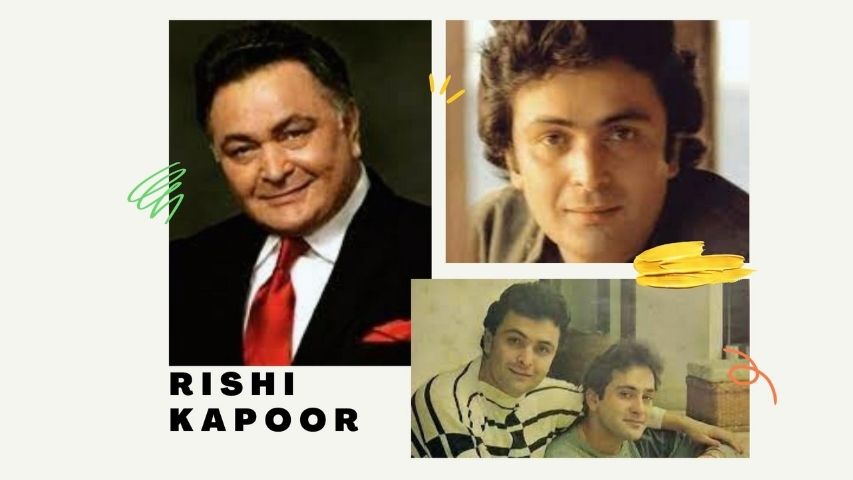 Rishi Raj Kapoor had debuted in Shree 420 (1955) at the age of three. He also played the young Raj Kapoor in Mera Naam Joker (1960) for which he won a National Award. The R.K. film Bobby (1973) opposite Dimple Kapadia became a national craze. He went through a spate of hits and flops like all actors do, but his spontaneous acting were infallibly commended.

Rishi, pet-named Chintu, excelled particularly in Khel Khel Mein and Rafoo Chakkar (1975), Laila Majnu and Kabhie Kabhi (1976), Amar Akbar Anthony and Hum Kisise Kum Naheen (1977), Sargam (1979), Karz (1980), Tawaif (1985), Chandni (1990), Bol Radha Bol (1992)… the list is endless. He was the quintessential romantic hero whose double-knit sweaters and mufflers became style statements. He was gallant to the point of starring with the maximum number of debutante heroines. He also directed Aa Ab Laut Chalein (1999), which unfortunately performed tepidly at the cash counters. He married his heroine Neetu Singh soon after they had shot in Kashmir for Kabhi Kabhie. 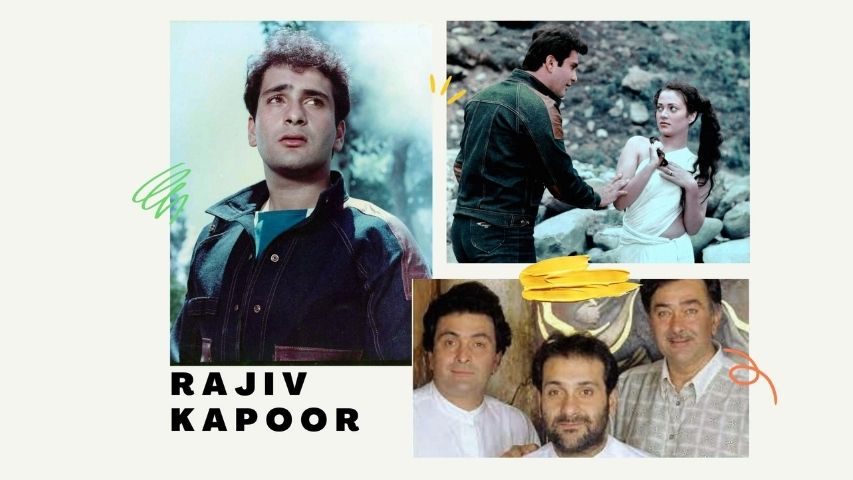 Rajiv Raj Kapoor, the youngest of Raj Kapoor’s sons debuted in Ek Jaan Hai Hum (1983) opposite Divya Rana. His most successful film was R.K.’s Ram Teri Ganga Maili (1985) opposite newcomer Mandakini. Other films like Lover Boy, Lava, Zabardast (1985), Zalzala (1988), Naag Naagin (1989) and the unreleased Aag Ka Dariya, alas, were a setback to his promising career. He then turned to direction with Prem Granth (1996), a commercial disappointment, with Rishi Kapoor and Madhuri Dixit. His last film, Toolsidas Junior, is releasing in upcoming weeks, but unfortunately he won’t see it as he passed away last year unfortunately. 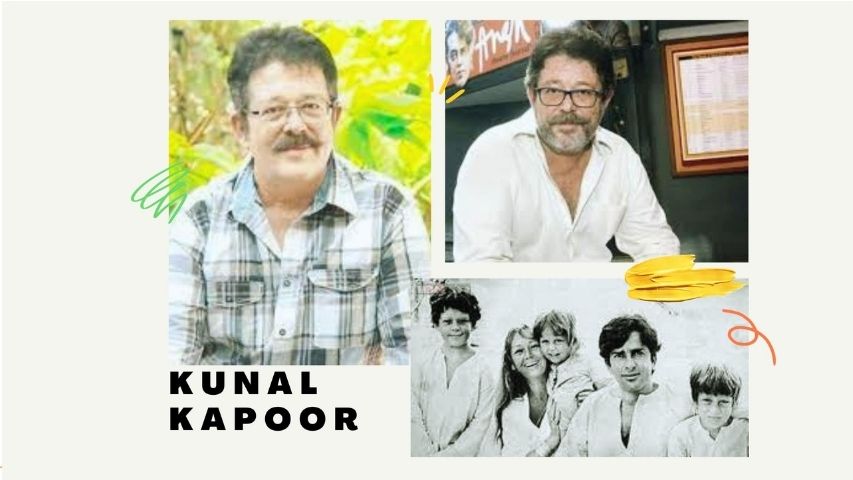 Kunal was the eldest son of Shashi and Jennifer Kapoor. He debuted in the English film Siddhartha (1972) as a child artiste. As a mainstream hero he was introduced in Ahista Ahista (1981) opposite Padmini Kolhapure. Other films he was seen in were Vijeta (1982), Utsav (1984), Trikal (1985) and Panipat (2019). 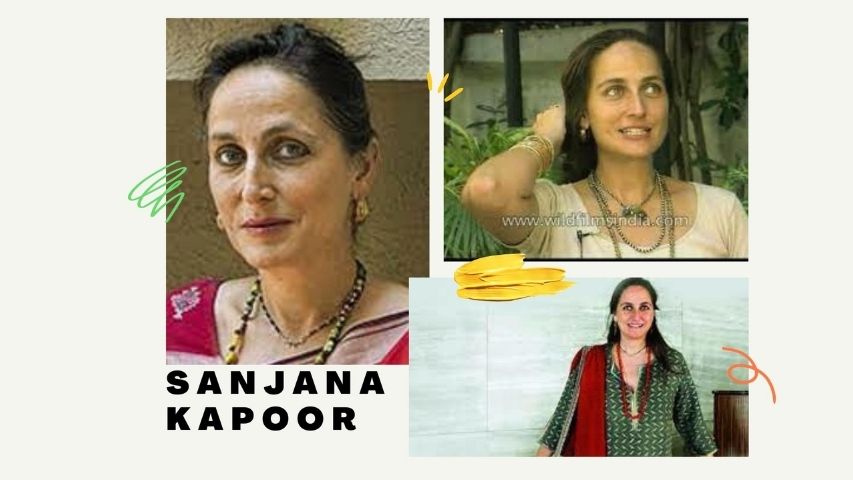 Kunal’s sister, Sanjana, was more inclined towards theater. Yet she did fetch up in brief roles in few films. She was seen in 36 Chowringhee Lane, Utsav (1984), Salaam Bombay (1988) and as the lead heroine in Hiro Hiralal (1989) opposite Naseeruddin Shah. For years, she looked after the prestigious Prithvi Theatre in Juhu. After handing over the reins to her brother Kunal, she had devoted herself to the preservation of wild life. 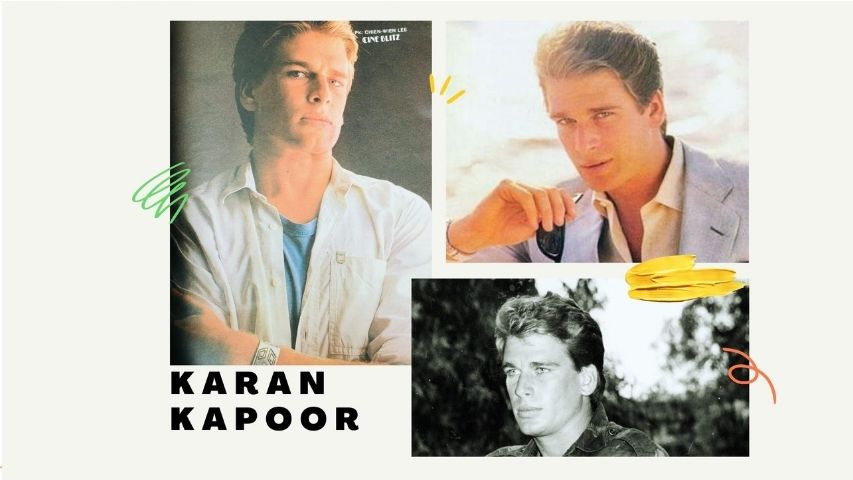 He acted in some films as a child actor. The younger son of Shashi and Jennifer Kapoor created a storm, as the Bombay Dyeing model and soon acting in films were inevitable. He debuted with Juhi Chawla opposite him in Sultanat (1986), appeared in Loha (1987) and Afsar (1988), after which he quit films and moved to the U.K. 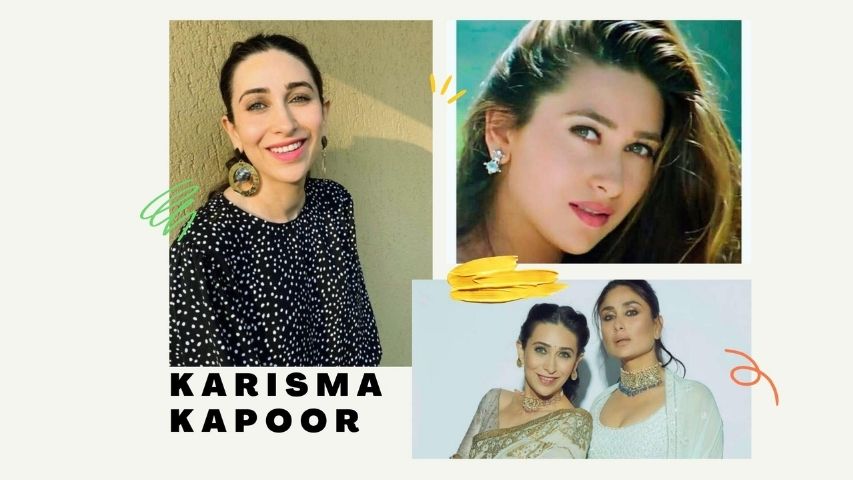 Fondly known as Lolo, this blue-eyed daughter of Randhir and Babita Kapoor debuted with Prem Qaidi (1991), which did well at the ticket counters. With her dedication and hard work, she became a dependable heroine, both in the emoting and dance departments. Some of her noteworthy films were Andaaz Apna Apna, Raja Babu and Suhaag (1994), Coolie No: 1 (1995) Saajan Chale Sasural and Jeet (1996), Judwaa (1997), Biwi No: 1 (2000).

It was Dharmesh Darshan’s Raja Hindustani (1996) in which she appeared in a makeover and delivered a knockout performance opposite Aamir Khan. Her most accomplished performances have been in Dil To Pagal Hai (1998), Fiza (2000), Zubeida (2001), Shakti (2003) after which she settled for matrimony, but has been separated from her Delhi-based husband for some years now, taking her two children with her. 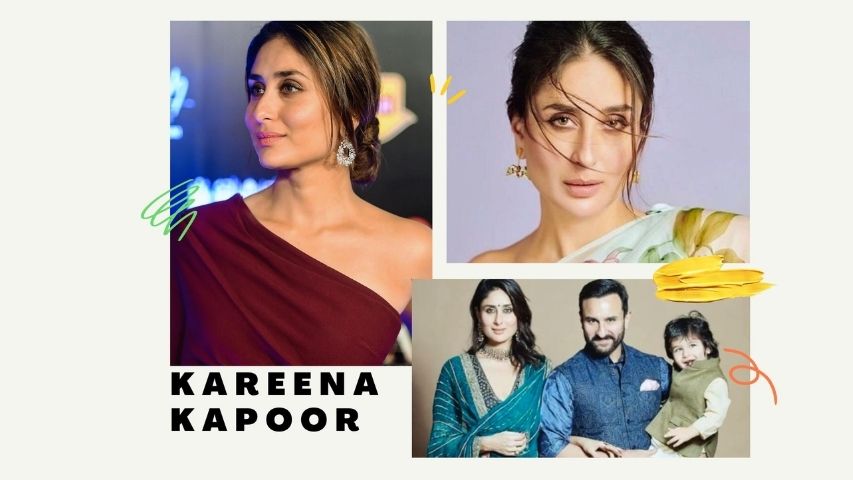 The younger daughter of Randhir and Babita Kapoor, Kareena aka Bebo was born to be a star. She had experienced being on the sets of her sister Karisma’s film and radiated star power right from her childhood. She made her acting debut with Refugee (1999) opposite Abhishek Bachchan after a fall-out with Rakesh Roshan, who was to initially introduce her with his son Hrithik Roshan in Kaho Na Pyar Hai (2000). 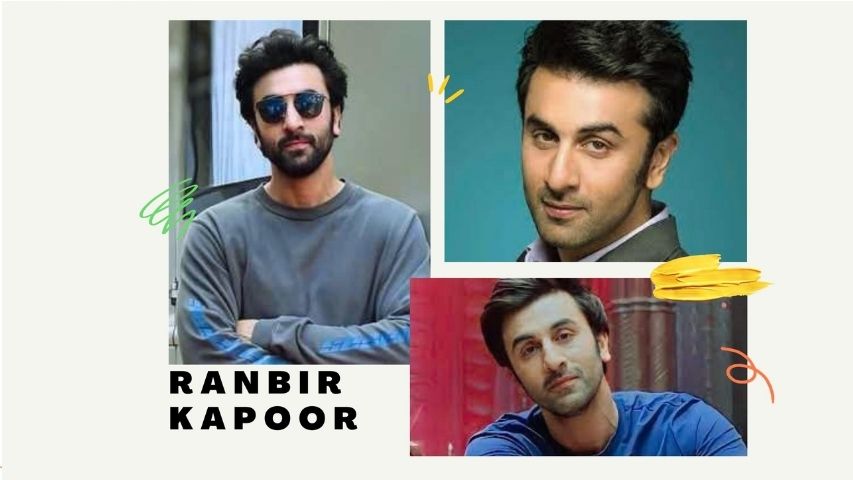 One of the highest-paid actors of Bollywood today, Ranbir Raj Kapoor is the son of the iconic couple Rishi and Neetu Kapoor. He was the blue-eyed boy of Sanjay Leela Bhansali when he debuted in his film Saawariya (2007) opposite Sonam Kapoor. The film tanked, but Ranbir made a huge impact.

Next, he was seen in Bachna Ae Haseeno romancing three heroines, which was successful at the ticket counters. His career saw its downers too, as his films Rocket Singh: Salesman of the Year (2009), Anjaana Anjaani (2010), Besharam (2013), Bombay Velvet and Tamasha (2015), all were rejected by the audience. But then he tasted great success and praises with Ajab Prem Ki Gazab Kahani (2009), Raajneeti (2010), Rockstar (2011) and Barfi (2012). It was Ae Dil Hai Mushkil (2016) and Sanju (2018), which elevated him to the A-list of heroes today. He happens to be one of the most dependable actors today.