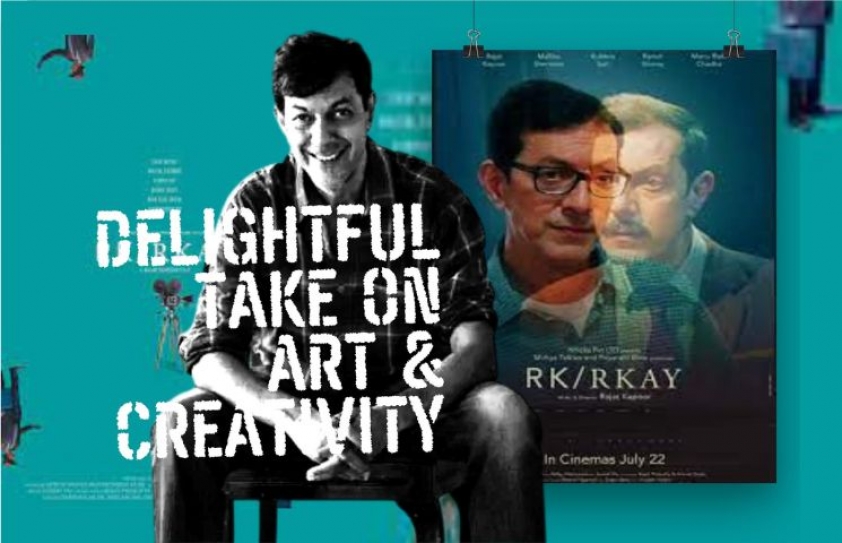 A DELIGHTFUL TAKE ON ART & CREATIVITY

In an age of brainless big-budget banalities, Rajat Kapoor’s new film is a deliciously unpredictable and thought-provoking exploration of the creative process, writes Shantanu Ray Chaudhuri

‘How do you solve a problem like Maria? How do you hold a moonbeam in your hand?’ There’s no reason for this classic song to come to mind while I was watching RK/RKay. But then it did. And I put that down to a fit of whimsy - a trait that best describes Rajat Kapoor’s quirky little film.

But on the way back home, I realized why it might have popped up. One had to change just a couple of elements in the lines and they hold true to the film’s premise: how do you solve a problem like Mehboob, the recalcitrant character who escapes from the film in which he is the protagonist? How do you hold on to a character unwilling to be part of your story, your film? How do you convince a character that clearly doesn’t want to live in the world his creator has conjured for him? ‘I lived there, but that life was not real,’ he tells his alter ego, the writer and director.

Filmmaker RK (Rajat Kapoor) isn’t quite happy with the way his film is shaping up. He cannot fathom exactly why. His assistant Namit (Chandrachoor Rai) tries to bolster his sagging spirits, telling him, ‘Keep the faith. People are watching the worst of films only because they are called independent’ - one of the film’s many self-deprecatory Meta references to the school of filmmaking that Rajat Kapoor belongs to. At the same time, the assistant also suggests that maybe RK should reshoot the film casting someone else as the hero, Mehboob (Rajat Kapoor, doubling up as the actor). And lo and behold!

One fine day, Mehboob goes missing from the rushes, the negatives have all the scenes that RK has shot, with a difference though, the protagonist is nowhere to be seen; the other characters seem to be talking to an ‘invisible man’. There’s a poster of the film Invisible Man that the camera captures often on the walls of RK’s editing suite. There’s another poster that keeps appearing: La Dolce Vita. Keeping in mind the dictionary meaning of this as ‘a life of self-indulgence’, one wonders if this is one of Rajat Kapoor’s many meta digs at the creative process.

The whole thing defies explanation but it’s not lost on RK that if he can’t find Mehboob, he does not have a film. His son Vivaan suggests that as the writer of the character, RK should know where Mehboob could have gone. After much frantic searching, including lodging a police complaint (try doing that about a ‘fictional’ character and you might have the wryly written situation that Rajat Kapoor conjures at the police station), Mehboob is traced to a railway station where he was supposed to be meeting his ladylove in the film, Gulabo (Mallika Sherawat).

A bewildered Mehboob is taken to RK’s home where he starts to develop a ‘character’ different from the one that has been scripted for him, and soon becomes quite popular with RK’s children and, more disturbingly for him, with his wife Seema (Kubra Sait, in a warm cameo that should have been more fleshed out). Things become complicated when the film’s villain, K.N. Singh (flamboyantly played by Ranvir Shorey), too, escapes the confines of the narrative, looking for Mehboob. No wonder we also spy a poster of M, what with all the frantic manhunt all around. 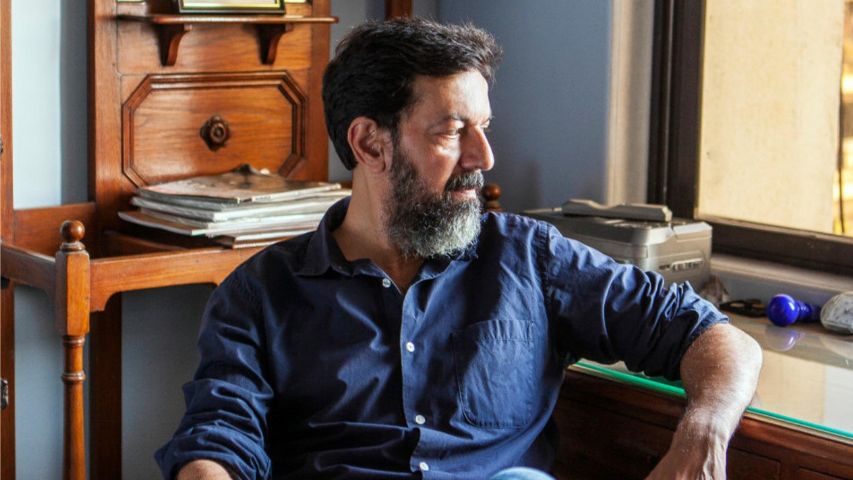 The central conceit, that of a fictional character developing an identity of his own, the blurring of identities, the porous boundaries between the real and the fantastical, has been the subject of literature and cinema. Most memorably in Woody Allen’s Purple Rose of Cairo, where a character in a film breaks the fourth wall to meet and woo an ardent viewer, before taking her back into the film. There’s Luigi Pirandello’s Six Characters in Search of an Author. Kapoor’s own works, Raghu Romeo, Mithya and Ankhon Dekhi, address these themes. Where RK/RKay branches out on its own is in the way Rajat Kapoor pays homage to Hindi cinema of yore.

RK and Mehboob of course hark back to two pioneers of Hindi cinema. The film that RK is making is titled Mera Naseeb, a throwback to film titles of the era. The dialogues, era-appropriately cheesy: ‘Mera naseeb meri mutthi mein hai’ or that delectable bit about ‘my father used to say that if the heart is unblemished, the world appears pure’. The film-within-a-film’s story is straight out of the 1950s and ’60s. The leading lady is Gulabo (recalling Pyaasa), and the dapper gangster is named, what else, but K.N. Singh, echoing the much-loved actor who essayed memorable villainous roles of the era.

And within this are framed the basic questions that plague any artist: what constitutes the authorial voice? Is it the egocentric aspect of creating art or the doubts that plague every creator? ‘What a failure a writer is if even the characters you create don’t listen to you. Sab saale apni marzi ke malik hai,’ laments the director at one point. How deeply must it cut when a character you have created tells you that you fail to breathe life into your characters, that’s why you have never made a successful film?

And all of this is done tongue firmly in cheek. Rajat Kapoor even throws the word ‘existential’ into the mix with customary self-deprecation. In a laugh-out-loud sequence, Ranvir, the real-life actor playing K.N. Singh is called to help capture the escaped character, providing an insight into ‘his mind’. His response, keeping in mind the freedom the director gives his actor to essay the role, ‘There’s no logic to his character. I have improvised…’

And the deft little touches you would most likely miss if you weren’t attentive. The dim glow that follows Mehboob into the real world after he escapes the film, underlining his ‘existence’ as a film character used to being lit up. Or the scene where he hails a taxi to Bandra Terminus and gets into it, and immediately gets out, asking the cabbie if they have reached. Because, you see, for a film’s character a single cut would suffice for the journey. That’s the extent of thought that has gone into the writing.

It is this sense of whimsy fun that carries the film through, every time it begins to wallow in self-indulgence. The last quarter of an hour may not quite measure up to the build-up - you can see the twist coming much before the director draws the curtain. But that’s a minor quibble in a hugely entertaining take on art and creativity, made more so by a galaxy of wonderful actors, Manurishi Chadha as the builder-producer is particularly good while Namit Das is a hoot as a rapping waiter, enhanced by the work of cinematographer Rafey Mehmood (brilliantly creating the look for the film within the film) and production designer Meena Agarwal (whose opening sequence sets the tone for the droll artifice that marks the film).

And the icing on the cake: Rajat Kapoor, who brings a quiet understanding to the two characters, a fictional one that gains agency as the narrative unfolds and his real creator who finds his hold on the faltering world around him. You can’t but help root for both even when you know how fantastical the premise is.