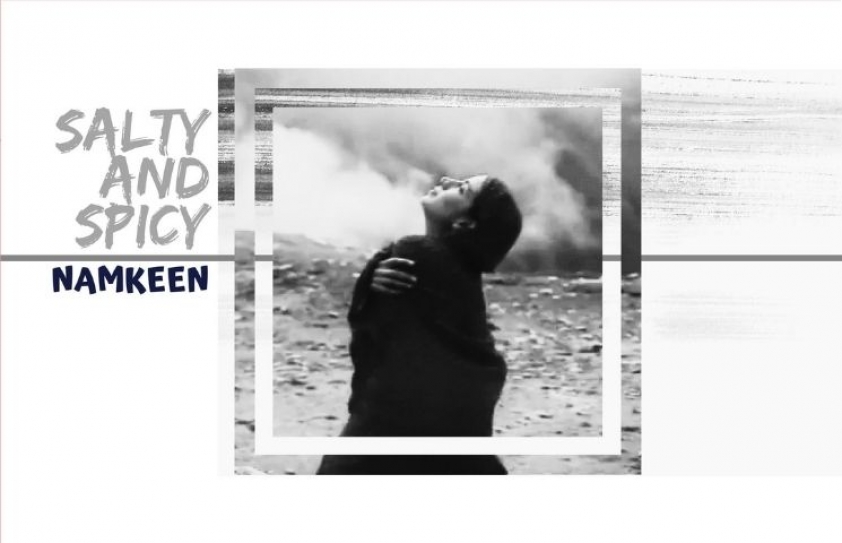 A lonely house looks so dilapidated that only some miracle seems to be holding it together. Four women dominate this house, each different from each other as various colors on an artist’s palette.

Shot in the hills of the picturesque locations of Himachal Pradesh, Gulzar’s Namkeen lingers on as his most beautiful and poetic work released in 1982, based on the story Akal Basanti - a short story by the widely-respected Bengali writer Samaresh Basu. Gulzar had previously made Kitaab (1977) based on another of his stories.

A powerful haunting piece of cinema with perfect casting, layered characters and most importantly, strong-willed women characters delving within the depths of their hearts.

Gulzar Saab introduces the unforgettable women whose lives are interwoven together like threads in a tapestry. Nimki the eldest of the three sisters is a pragmatist, with a profound sense of caring as she mothers her own mother along with her younger sisters. Nimki is the spine of the family.

Mithu, who had been kidnapped in her childhood is mute since fear and trauma have snatched away her voice. The youngest Chinky is a firebrand with a sharp tongue, keeping pace with her sisters relentlessly. Their mother Jugni (called Amma) was a Nautanki dancer in her younger days, who succumbed to a bad marriage with a sarangi player Kishan Lal. She separated from her husband soon after, as she was afraid he would make them join the Nautanki, which she detested. Frail now and wearing cracked spectacles, she tries to run the kitchen fires with the help of her daughters. 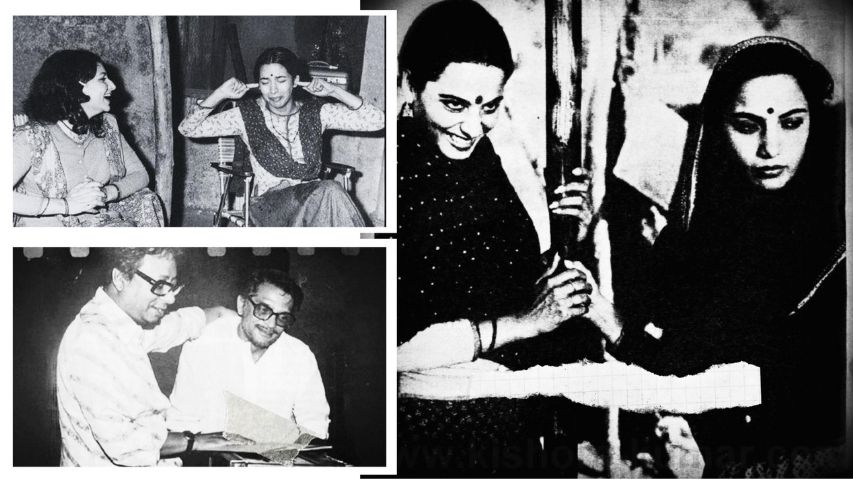 Enters Gerulal, like a ray of hope. A truck driver, ferrying loads for the under-construction bridge in the vicinity, he becomes their tenant and gradually observes the women from their body language and minimalist facial gestures, and builds a rapport with each one of them separately. It is fascinating to see the usually foul-mouthed truck driver transformed by them.

Namkeen is narrated with an alternately tangy and bittersweet touch. The unalike sisters remain bonded by grief and giggles. The mute Mithu, who is a sensitive poet, dreams of a Prince Charming who will rescue her. As for the youngest Chinky, she is naughty, spicy and constantly playful but always conscious of the lean financial resources of the family as her eyes speak volumes for her maturity.

The superlative music by R.D. Burman played a vital role in the film’s impact: Raah Pe Chalte Hain by Kishore Kumar is a travel song shot on Gerulal, essayed by Sanjeev Kumar, and focuses on the breathtaking vistas of the Kulu Valley. Phir Se Aaiyo Badra Bidesi is a calming track by Asha Bhosle and so is Badi Der Se Megha Barsa. A track that I often saw on Dordarshan’s Chaaya Geet as a child was Aanki Chale Banki Chale, a fun song pictured on the three sisters and their mother as she is seen grinding spices. Its Bengali lyrics Panta Bhaate Tatka Begun Pora (They eat the previous night’s rice with aubergine the next day) still resonates. The last song, Aisa Laga Ke Surma, by Alka Yagnik was a mujra set-piece filmed on Jhumki during her Nautanki days.

Gulzar Saab kept the storytelling calm and collected, never going over-the-top even when the characters remain on the verge of a breakdown. Waheeda Rehman, as the paan-chewing mother, a tetchy matriarch, played her role to perfection when she was all of about 48 years old. 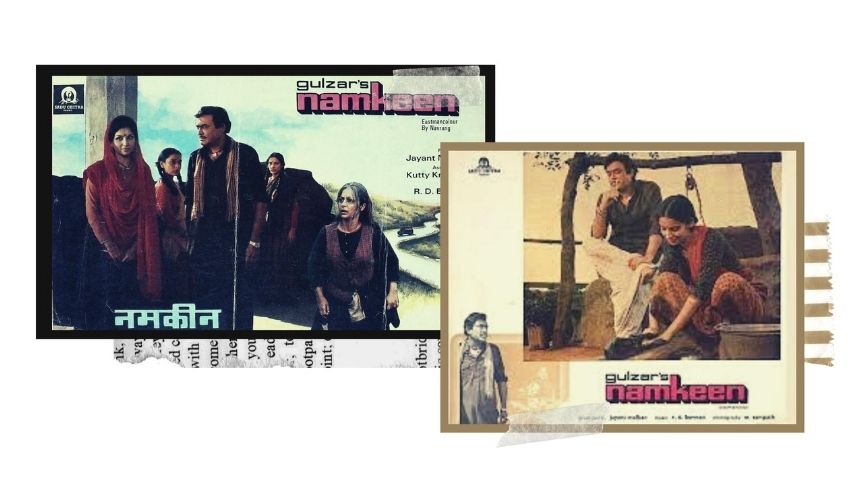 Sharmila Tagore as the eldest daughter demonstrated her strength and vulnerability  as she had to choose between her love for the truck driver or  to stay back with her family. Shabana Azmi as the mute Mithu rendered a touching performance with her eyes and her smile doing most of the talking. The scenes where she manages to strike a rapport with Gerulal are a class apart.

The surprise packet was the perky and blunt Chinky enacted by Kiran Vairale in a stand-out performance. Sanjeev Kumar as Gerulal was flawless as ever. Character actors like Ram Mohan, T.P. Jain and Kamaldeep were in form too.

A major section of the film was shot in Himachal Pradesh (Kulu Valley). The other scenes were shot at Mehboob Studio and Film City (Bombay). Namkeen was meant to be a quickie to be wrapped up in three months. Unfortunately, it took three years to complete. It was released on 12th February 1982 with great expectations but didn’t appeal to the masses in spite of the rave reviews that it received.

It is said that the producer, Jayant Malkhan, refused to sell the territories of the film as he believed that Gulzar saab was making Meera simultaneously and conjectured that by selling the film later, he would be able to fetch higher returns. The gamble backfired: both Namkeen and Meera failed to create a buzz at the ticket counters. It also had a limited theatrical release because they faced difficulties in finding distributors for the film. 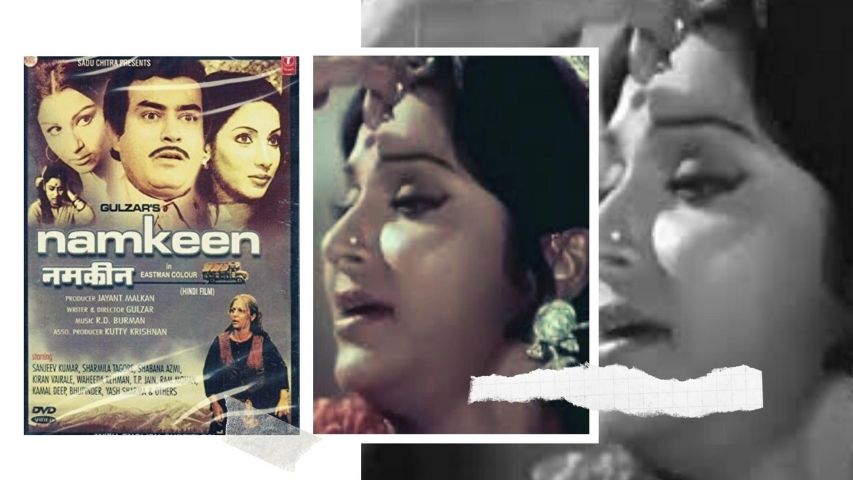 Initially, Rekha was cast in Namkeen as Nimki. Shooting had already begun but high voltage drama had erupted on the sets - Rekha objected to the presence of a journalist who was invited on the sets. She was out of the film. Her argument was that she was staying off the press and had pressured Gulzar to ask him to leave. Gulzar refused and she walked off the set in a huff. Gulzar immediately called his friend Sharmila Tagore to step into her role. Rekha’s loss was Sharmila’s gain as her performance was hugely applauded. Deepti Naval was to play the role, which was essayed by Kiran Vairale.

Sanjeev Kumar, a personal favourite of Gulzar saab, would complain to him that he always focussed on women-centric subjects with him like Aandhi, Mausam and Namkeen. Yet Sanjeev Kumar was never overshadowed. Gulzar was keen to sign his favourite actor once again for his Ijaazat (1987), which was being scripted, opposite Smita Patil, but unfortunately by the time the final script was ready both the stars had passed away. Namkeen was their last film together.

Namkeen can be seen today on Disney Hotstar.  And it’s plain to detect that here’s one unusual and signficant story, which was told by Gulzar saab straight from the heart.