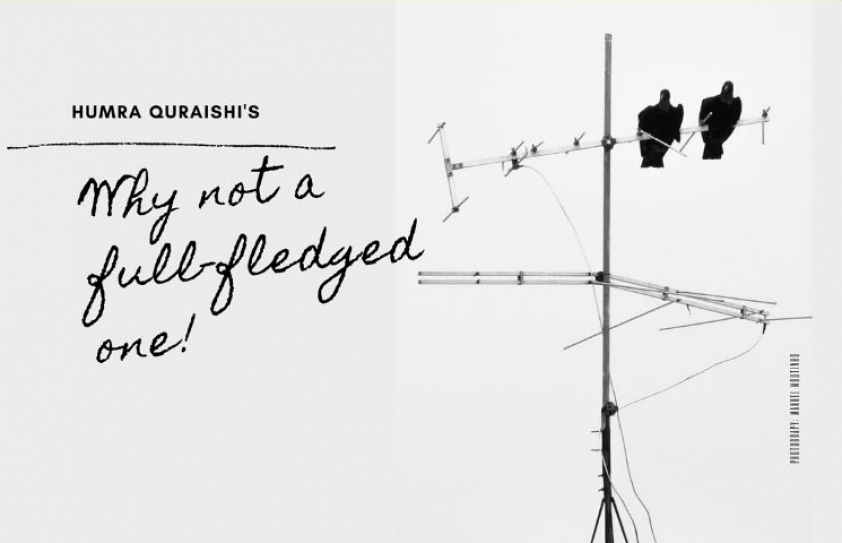 Why not a full-fledged one!

With my father it was different, as blood bonding had taken care of that  connectivity with all those murmurs and mutters he’d come up with, as  he’d sat all too sad and  sullen in the grip of  this disorder – Humra Quraishi

I begin to offload. Not mere clothes but more… those thoughts hanging about heavily. Stubbornly unmoving, intruding even now whilst I’m trying to cover this nakedness. Throwing away the synthetic kameez, fitting  my lean frame into one of those nondescript cotton ones that lay near-stranded at one end of this ageing bed, overburdened with the heap of clothes sprawled on it. But why go changing, from a this to that?  I could  go along the street,  towards the  bus- stop, with that kameez  on me; but no, here I sit  back and change. And, then, all too suddenly start un-hooking the faded brassiere. What’s the need of this saddling bandobast when my breasts lie shrunk. Hopelessly sullen, in that ‘giving- up’ format.

Thoughts hit, as I near the staircase. After all, the same staircase that had  got me right here. From that bustling city to the outskirts of a much smaller city. From those broken bonds to another of those turns.

I had landed here this spring. Facing that broken fence, standing near the   boundary wall. Not for long. Up the wooden staircase, towards this ‘home’ for the Alzheimer’s stricken. I’d heard about it from my  homoeopath, Dr Guru Dutt,  who  had admitted  his Alzheimer’s stricken wife, Prema, in this home. He had suggested that I shift base together with focus, ‘You’ll have to supervise the running of that place. Nothing very much… not much work. It’ll keep you busy… not sitting brooding. And if you aren’t comfortable, you can always get back. Nah, nothing formality ridden. Only simple supervision… you’ll manage.’ 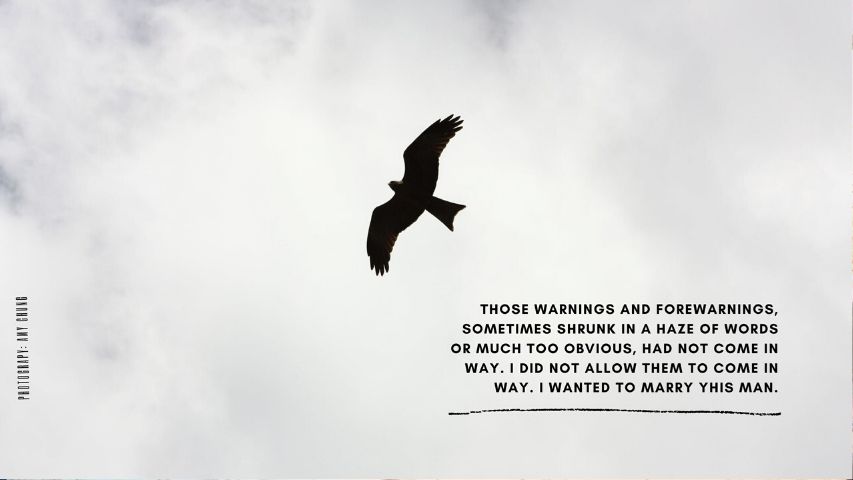 Though situated on the outskirts of Jammu, but the slow pace of smaller locales suited my temperament. Also, I was aware of the basic   backgrounders to the Alzheimer’s Disorder, as my father was  Alzheimer’s stricken, till about the time he  lay  shrunk together with the  memory  cells.

The front door led to a  square-shaped  room,  where  sat  a  dozen  inmates and  a  couple  of  caregivers. Also, stood out a doctor of sorts with a semi- white shirt on him. Giving  impatient  looks, he’d  begun  to  offload  even  before  I  could  offload the  baggage  on  me.

‘This my office… covered the entire balcony for additional rooms. Given a room to each inmate. All from very good backgrounds. There’s  a retired  general, also one retired doctor, two mechanical engineers and  that former police chief and… eleven men and two women. Prema madam’s condition worsening and Shagoofta Shah keeps sitting in her room. Just two days back a new inmate admitted. This man, Rahmat Raheem, was into some business venture till it failed… he talks too much. His younger brother left him here… here, these files on these inmates. Carrying all possible details. Read them later. Now rest… your room that side, close to the main dining area.’

‘Prema madam’s room right here .Some rooms that side and …’

‘Haven’t met him though been speaking to him, even yesterday I called him before starting from New Delhi. Actually Dr Guru Dutt knows him and he’s…’

‘I’m an allopath, don’t believe in homoeopathy. But Sen sahib does and keeps  popping sugary pills!’

‘Just walked towards his home. There, that white building. See from this side window. There, near that turn. This also his ancestral bungalow.’

‘His father’s there and…’ 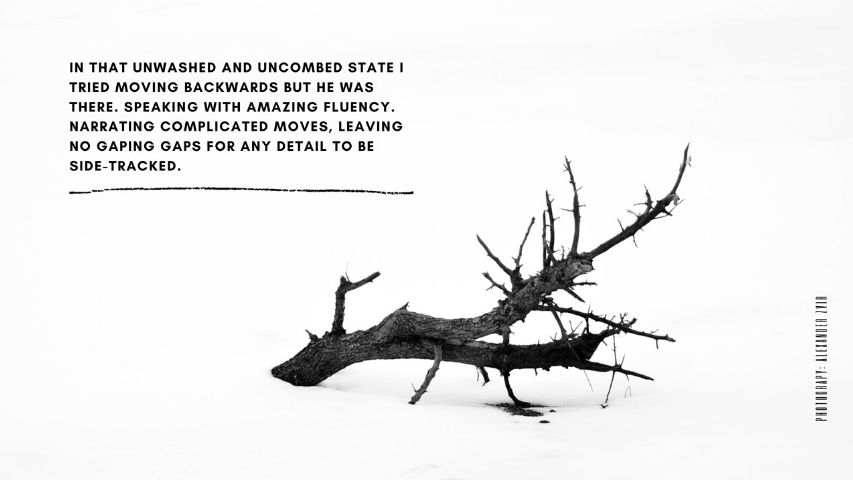 ‘Yes, now he’s turned very aggressive and somewhat difficult to handle. Shifted him out from here… some of these patients get aggressive, others sit all too quiet and depressed… It does get tough… very tough.’ He walked away but not before asking me whether I’d be able to manage this home for the Alzheimer’s stricken. Realizing I should be, considering I’d undertaken this overnight train journey, he’d looked somewhat assured, rather reassured.

I’d tossed and turned on this ageing bed. Apprehensive and anxious.  Not sure whether I should have come here. Not sure whether I’d be able to handle even one of these inmates. Not sure of just about anything. Yet I’d undertaken this journey! Landed here, on the outskirts of this city!

Thoughts continued to  nag:  Wouldn’t it be too exhausting to sit amidst  these inmates affected  with  shrinking  memory  cells, to  keep listening to their vague recollections, to keep nodding to those disconnected sentences  and  hazy  bits  pulled  out  from their polka -dotted  memory reservoirs?

With my father it was different, as blood bonding had taken care of that  connectivity with all those murmurs and mutters he’d come up with, as  he’d sat all too sad and  sullen in the grip of  this disorder.

Restless I lay, even as the sun’s rays came through the bay window. Not ready to face another day. And then sat all too startled, as I’d heard the  door open. Opened with force. Ajar. And then more than ajar, as a well-built tall man had walked in with a confident look about him.

‘No, not Sen. I’m Rahmat Raheem…new fellow here…in this terribly boring place. What you think of this stupid place?’

‘Told you here to look after us! You some new supervisor or what! To look after us... are we silly sissies! And you still sleeping. Breakfast over and… ’

Taken aback, I’d jumped from the edge of this bed. Only to face him. Stale breath from my un-washed mouth hitting him. Not hard enough. He had continued standing right there. Staring in that persistent way. Unmoving, even when I’d   hit  out, ‘You that new patient?’

‘Patient! No patient! Dumped here! My brother thinks my memory cells  shrinking. Had this head checked! I’m no bloody AD patient but he’s getting  paranoid. Just lost my way once or twice but that doesn’t mean I’ve lost my head! Certain he wants to grab all our family property and so me dumped here! Okay let him walk away with everything! Who cares! My memory okay!’

In that unwashed and uncombed state I tried moving backwards but he was there. Speaking with amazing fluency. Narrating complicated moves, leaving no gaping gaps for any detail to be side-tracked.

And not just that one day. But every single day. Over what seemed unending  walking and  talking sessions. Never before  I’d  heard such long-winding tales revolving around his one broken engagement, his  failed  take off with another of  his  women friends, his  fall-out with the who’s who on the political circuit. And by the time each tale ended he’d look about agitated. As though definite deprivations had left dents. As  though  he  had  been  a misfit  on the  circuit, a  failure  at the  networking games, side-lined  for times to come.

During those offloading sessions, he’d clasped my hands. Strangely or not so, I’d  begun  to reciprocate. I’d begun to feel happy. For his clasp didn’t relay lust and nor love. Just about some sort of support. Perhaps, that emotional support I’d been craving for, yearning for, all these years. Never ever finding it. Not even in that marriage that had throttled my urges, killed those emotions.

There’d be an abundance of characters fitted in each one of his tales, ranging from  the rogue rulers to the  political mafia of the day. First names accompanied by surnames. And to top it all he’d exclaim, ‘What’s in a name!’

And on that particular day when he  exclaimed, ‘What’s in a  marriage!’ he’d looked right into my eyes, with emotions dripping from his eyes, uttered the  eight - letter word.

‘No, no, no marriage!’ I had screamed. A couple of the inmates together with the caregivers rushed towards us, fearing there’d come about a deadly twist in Rahmat Raheem’s offloading sessions. More so, as he had come up with an additional one- liner, ‘Obviously a re-marriage for you! For me first time!’

Made me laugh and cry. Made the others in that room, that is, those whose  memory cells were not yet shrunk, look  about  so very enviously.

Till about the next noon when I’d decided to go ahead. Marry this man.

Those warnings and forewarnings, sometimes shrunk in a haze of words or much too obvious, had  not come in way. I did not allow them to come in way.  I wanted to marry this man. Determined I was. After all, I had fallen in love with his childlike ways and with that earnestness holding out in his eyes.

But  before his hand could  clasp  mine in  that  ongoing  way  or  before  I could reciprocate any of his romantic moves, this Alzheimer’s home  seemed  turned  into a  fortress.

He was dragged out. Towards  a  police  van, thrown into it as though  he  was nothing but a  bundle of bones . To  be  silenced  and  thrown aside,  for offloading names and surnames with big designations and even bigger allegations to  them.

I had tried running after that van, screaming hysterically, ‘He wouldn’t ever speak out… he my new husband. My new husband… we just married. He wouldn’t blurt anything now… I’m telling you all… he wouldn’t speak out!’

Once dragged for interrogation, there’s that dead - end. To be stacked amongst those whose names are scribbled in sarkari registers. Shut and closed. Never ever to appear or reappear.

To try trace him, to meet him, to prove his innocence, to see him - either alive or dead!

Married, to be precise re-married, for one single day. Thrown in the half-widow  category the very next day, when he was thrown in the police van  parked  close to this Alzheimer’s home.

Even  now as I’m  readying  to go down this  staircase, to hop into a  bus,  to  locate my ‘missing’ husband, those thoughts don’t leave. Hover around mercilessly and endlessly. And as I throw a faded dupatta on my breasts, I  stare at  my  chest. Heaping some more from those bygones. After all, right from the teenaged years when my breasts began sprouting on this chest,  the two seemed to keep  abreast with the emotional phase I’d been going  through.

My breasts looked  ‘all there’ the  first   time I  had  fallen  in  love. The  inevitable breakup made them droop. Not for long. Changing their very  look,  getting  back to  form  as  soon as  I was attracted a second time. But  not before  long, the two lay  listless along with the rest of the  form, as  I’d  lay sad  and  sullen in an ongoing state of melancholy, heaped on me by  that mismatched marriage. Unmoving I’d lay. Night  after  night , Sunday to  Saturday, to any of those sorrow-saturated days that followed in quick  succession. Till I’d cried aloud. Pack-up time of that marriage that traumatized me each single day.

From all those bygones of that big city’s big-paced settings.

Towards this smaller city, with small-paced settings, where I’m now sitting with the half -widow’s tag pinned on me.

As nobody is sure whether Rahmat Raheem has been left alive or quite simply silenced for times to come!

Today there are no full- fledged closures.   A