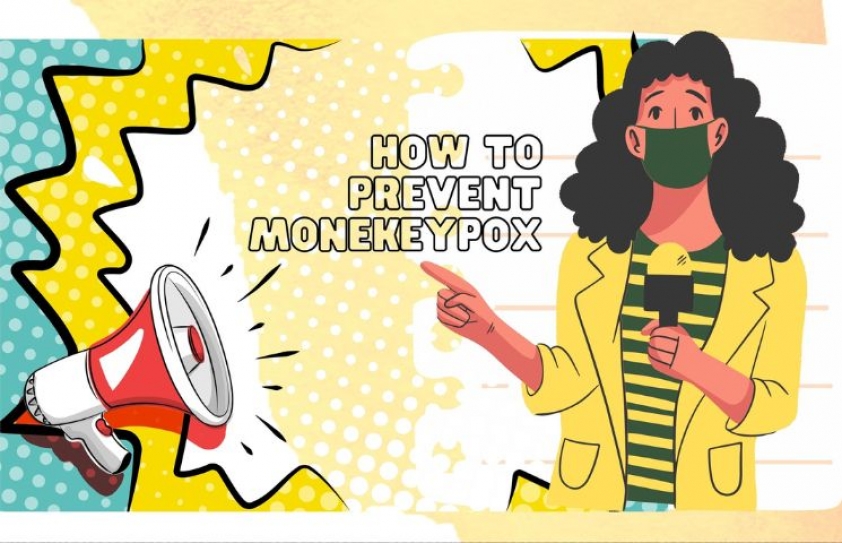 Dr #KishoreMadhwani offers valuable tips on how to tackle the current outbreak of monkeypox, while similarly keeping COVID-19 at bay.

WHO has triggered the highest alert after Covid 19 for Monkeypox, the next global pandemic). It has declared monkeypox as a global public health emergency of international concern after 75 countries have reported over 16000 confirmed cases and 5 deaths (from Africa).

Of these are 3400 cases from the USA and 2600 from the UK. Both these countries comprise one-third of the global burden. There are 4 cases of Monkeypox detected in India; 2 in Kerala and one each in Delhi on 24th July and Telangana on 25th July. However, medical experts say the spread over a week’s time should not be a cause of alarm. While the patients have been isolated and are being treated in government hospitals, their close contacts have been traced and placed under observation.

That also gives other states enough time to strengthen their control systems, as it appears that the virus will not be limited to Kerala, Delhi and Telangana.

Currently in India we are in the fourth surge of COVID-19 with over 20,000 daily cases being officially reported and Delhi reporting 1000 cases daily. During this surge, we are now experiencing outbreaks of swine flu too in Pune, Mumbai, Delhi, Rajasthan and other Indian states. All three diseases are virus outbreaks that are now in human-to-human transmission stage.

COVID-19 and Swine flu are highly infectious and easily transmissible through air, whereas monkeypox is contagious (spreads through close contact or touch with infected cases) and less transmissible through air. Today we are witnessing a competition between the viruses. COVID-19 vaccination coverage has developed immunity in local communities and we are hence observing swine flu becoming more active. Doctors have the added responsibility to ensure that malaria, dengue and also Guillain barre syndrome are not overlooked in differential diagnosis. The monkeypox virus is not a respiratory virus like SARS-CoV-2 or H1N1 (Swine Flu) and spreads through very close contacts like clothes or body fluids.

However, there is a silver lining: Let me assure you that there is no cause for panic. All three are preventable if you don’t let your guard down now. Vaccinate yourself and strictly adhere to COVID appropriate behaviour once again.

To protect yourself from all three,  do understand in the minutest details about the causative organisms, modes of transmission, treatment (to control and reduce severe complications) as well as prevention.

WHO’s Health International Health Regulations Advise: Focus on raising awareness about the disease - transmission, manifestation, symptoms and  reminder to all to adopt safe behaviour as well as protective measures based on the risks faced to prevent further spread.

What is Monkeypox? It is an infectious and contagious (spreads more by touching or close contact with a case rather than by air transmission) disease, caused by an enveloped double-stranded DNA virus that belongs to the Poxviridae family. It is a zoonosis: it means it is transmitted from animals to humans. Animal hosts include a range of rodents including rope squirrels, tree squirrels, gambian pouched rats, dormice, non-human primates, and other species.

Though currently across the globe, it is in human-to-human transmission phase, this is limited, with the longest documented chain of transmission being six generations - meaning that the last person to be infected in this chain was six links away from the original sick person. It can be transmitted through contact with bodily fluids, lesions on the skin or on internal mucosal surfaces, such as in the mouth or throat, respiratory droplets, and contaminated objects.

It originated in Central Africa and West Africa but is now spreading globally. Monkeypox virus is an orthopoxvirus that causes a disease with symptoms similar, but less severe, to smallpox. While smallpox was eradicated in 1980, uncertainty remains on the natural history of the monkeypox virus and further studies are needed to identify the exact reservoirs and how virus circulation is maintained in nature.

Monkeypox is marked with fever, malaise (generalised feeling of being unwell), asynchronous rash and painful lesions all over the body, enlarged lymph nodes, lack of energy, sore throat and cough, back pain, and muscle aches. 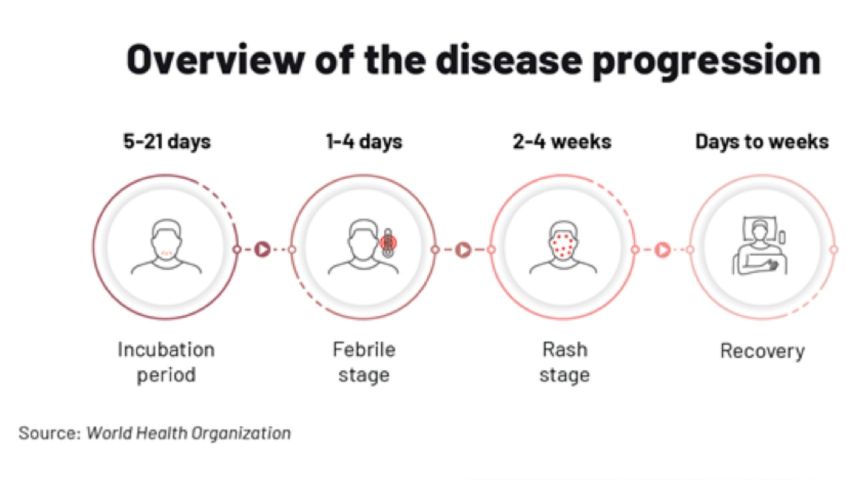 Since May 2022, 3040 cases have been reported to WHO from 47 countries (suggesting that undetected transmission might have been ongoing for some time in these countries). Transmission is occurring in many countries that have not previously reported cases of monkeypox, and the highest number of cases are currently reported from countries in the WHO European Region.

As the disease spreads through respiratory droplets and contaminated objects - Surface (1% hypochlorite solution) and self sanitisation (thorough handwashing with rubbing soap for 20 seconds  plus water) and  sanitisers (70% alcohol based)  are a top priority. 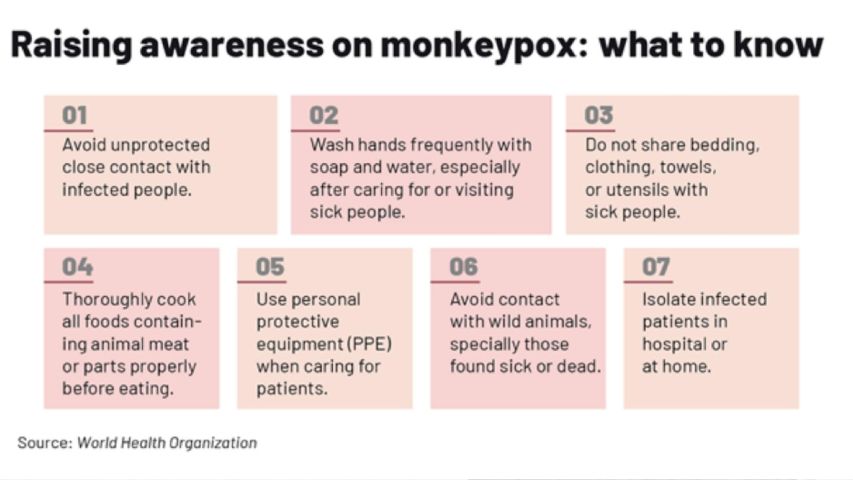 The majority of confirmed cases of monkeypox are male and most of these cases occur among gay, bisexual and other men who have sex with men in urban areas and in clustered social and sexual networks.

The other vulnerable population groups are immune compromised individuals (cancer, HIV, auto-immune diseases), children, pregnant women, healthcare workers and close contacts of diagnosed cases. Experts say the part of the world population that has been administered the smallpox vaccine may have a strong and long-term immune response (or antibodies) against monkeypox, with its effectiveness at 80% to 85%. While this minimises the risks for that group, what could be the preventive steps for those who aren’t vaccinated?  Experts say it is debatable whether individuals not vaccinated for smallpox (eradicated in 1980) and born after 1980 are a vulnerable group.

CDC, USA recommends avoiding intimate physical contact and sex with multiple or anonymous partners. The Ministry of Health, Government of India, has officially announced that international travellers exhibiting symptoms of fever, back pain and bodyache will be admitted into the isolation ward at Lok Nayak Jaiprakash Hospital in New Delhi, immediately after landing. They may be subjected to testing and samples will be sent to the National Institute of Virology at Pune. RT PCR test or NAAT (nucleic acid amplification test) for monkeypox are the tests performed internationally.

The decision on type of testing, use of antiviral agents like tecovirimat (developed for smallpox approved by the European Medicines Agency for use in monkeypox cases abroad) and vaccinations in India (pre-exposure as well as post-exposure) will be decided by the Indian Health Authorities; Ministry of Health including National Immunisation Regulating Authority.

WILL A VACCINE SHOT FOR MONKEYPOX BE NECESSARY?

Monkeypox is a self-limiting disease with symptoms lasting between two and four weeks. If rash becomes painful and widespread; non-steroidal anti-inflammatory drugs like Ibuprofen and Acetaminophen are prescribed.

As it is neither extremely contagious nor highly fatal like the Delta variant of COVID-19, the need for a vaccine may not be an extreme health emergency. However, on July 22, the European Medicines Agency approved the vaccine Imvanex for use against monkeypox. The European regulatory body had given its nod to the vaccine in 2013 for prevention against smallpox.

The U.S.-based Moderna has started initial spade work on monkeypox vaccines. Vaccine makers in India and globally too, are in a wait-and-watch mode until the government’s medical and regulatory agencies take firm decisions. Theoretically, yes, it is possible. But in practical terms, do we need it yet?

Hence the government of each country will decide its strategy on use of antiviral agents as well as vaccinations against monkeypox depending on the epidemiology of the disease prevalent there.