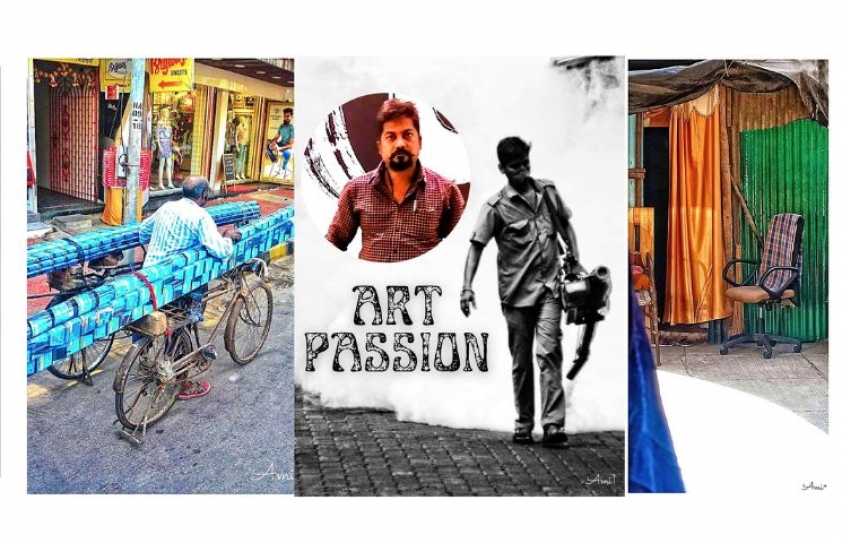 Khalid Mohamed in conversation with poet-photographer-artist, Amit Kumbhar, for whom art counts way more than fame or money.

Tiptoeing between slap-hard and caressingly subtle images, in his paintings, sketches and photographs, he has evolved a singularly distinctive style. Not yet in the forefront of the art world, since he is stubbornly averse to ringing the doorbells of galleries, in his 44 years Amit Kumbhar hasn’t harboured any ambitions of making money.

I chanced upon his arresting work on social media platforms and was curious to know why he has remained in the shadows. To know Kumbhar’s story, first-hand, I interviewed him face to face, a story, which he narrated without any notions of self-grandeur. For him the ways of seeing art counts way more than figuring in the star galaxy of artists. Our conversation: 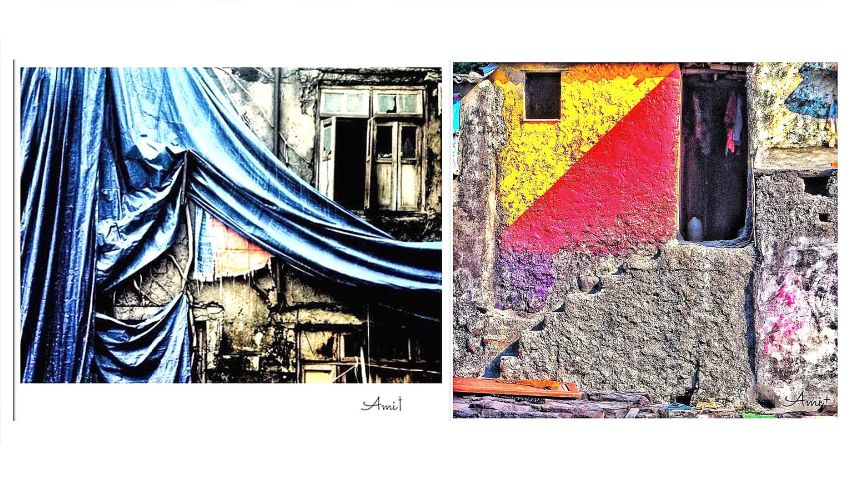 Amit, could you fill me in on your origins?

I was born in Wadia Hospital, March 13. My father, now retired, was a clerk in the Electricity Board at Bandra. We lived in a 10x10 feet room with a patra ceiling in a Jogeshwari chawl. I could somehow complete my B.Com from the Gokhale College in Borivali. With time, we moved to a larger room of 400 square feet in Kandivali.

From the age of five, I would paint nature studies and scenes from my surroundings in exercise books and on newspaper pages. My father had saved and scrimped to see me through college, he didn’t want me to become an artist, that would only plunge me into insecurity. Still, I would deliver newspapers and milk packets to doorsteps, and work 12 hours a day, standing at a packaging factory for pharmaceuticals, IPCA, which belonged to Ajitabh Bachchan I think.

I wouldn’t like to romanticise my past or grumble about ‘the struggle’ as it’s called. It was a difficult childhood for sure, but I found solace in reading the eminent Marathi playwrights and poets: Vijay Tendulkar, Pu La Deshpande, Mangesh Padgaonkar, Mahesh Elkunchwar, Namdeo Dhasal and Dilip Chitre.

And I chanced upon photography. I had a cell phone, which broke, I replaced the camera in it with an I-phone 7 one. And began clicking, editing the frames within the facilities in the camera.

You continued to work at the packaging factory?

I shifted to marketing electronics and fire extinguishers at the Grant Road shops. I would go door-to-door, and offices, selling them and also repairing TV sets. At this point, I veered towards writing poetry. I must have written 200-300 poems on relationships, art and artists, and social issues. One of them on Smita Patil was published in the Diwali edition of a Marathi magazine. None of this was enough for survival though. My parents are 75 now, and Aaji, my grandmother, is 95. My brother and his wife stay with us, both work and contribute to the everyday expenses.

The point is at the age of 16 I would have liked to study further, Art History, maybe. Since that seemed impossible I would pore over art books at the American Centre, the British Consulate and the David Sassoon libraries. I was particularly drawn towards the artworks of Klee and Gauguin, and the books of John Berger.

I read the English translation of Prabhakar Barve’s Kora Canvas, which inspired me to develop a style of painting in black and white only. I never tried to sell them. Then Mortimer Chatterjee of the Chatterjee & Lal gallery at Colaba, behind the Taj Mahal Hotel, expressed an interest in them. I had been recommended by artist Mehli Gobai whose house at Cuffe Parade I would visit to see him at work on canvases. Around 2012, ten of my abstract works on the theme of shadows in ink on paper of Imperial and small size, were sold at a group show organised by Mr Mortimer.

Somehow my passion for art, poetry, and of late photography have coalesced into my love triangle. 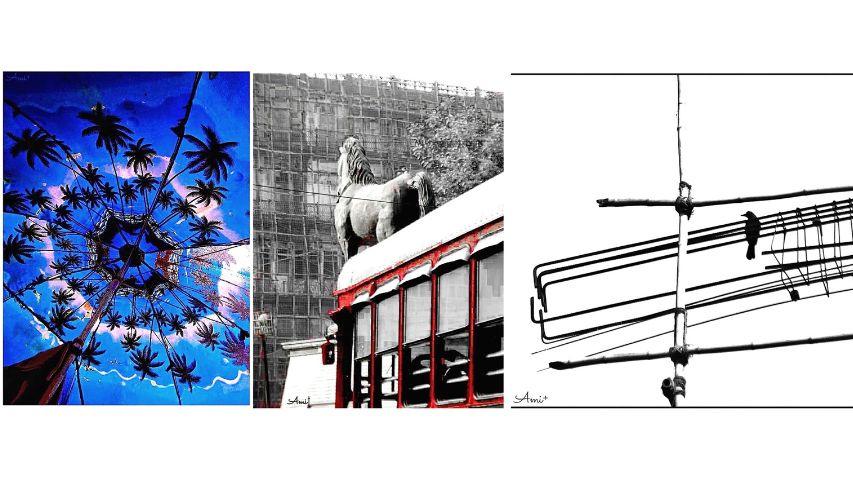 Have you ever been in love?

Twice, once during college and then after. I would write poems to the girls, neither responded. I suppose my love was one-sided. My family tried to organise an arranged marriage, I wasn’t ready for that. There were too many responsibilities at home, the girl would have to share my burdens, which might have led to an unhappy marriage.

Instead I would spend time, whenever I felt alone or lonely, watching films on VCR with my friends at the chawl. Aaji had taken me to see the first film in my life, Vishnupant Govind Damle and Sheikh Fattelal’s Sant Tukaram. I was hooked after that to the iconic works of Raj Kapoor, Guru Dutt, Shyam Benegal,  Govind Nihalani, Dev and Vijay Anand.

I joined the Prabhat Chitra Mandal and was exposed to the masterpieces of Federico Fellini, Satyajit Ray, Akira Kurosawa, Ingmar Bergman,  Andrei Tarkovsky and so many more. Cinema is part of my art if I may say so, expressed through light and shade, the darkness in the auditorium and the luminous images on the screen, especially the ones created by the lighting of V.K.Murthy, Sven Nykvist and K.K.Mahajan for Mani Kaul. I also watched (still photographer) Gautam Rajadhyaksha at work for a couple of days, noticing the beauty of his soft focus lighting.

Of what practical use, has all this gyaan been?

Practical or not, the understanding of art has been of the maximum importance to me. So I don’t care if I’m not approached for my artworks, nor am I going to pitch them around, which has become a norm. I have met artists like Prabhakar Kolte and Laxman Shreshtha to understand abstractionism. At the same time, I’ve admired the urbanscapes of Sudhir Patwardhan and all the myriad forms - be it metascapes and portraits or heads by Akbar Padamsee.

What’s your view of the current state of art?

There’s been no major innovation for years. I believe even the syllabus of the J.J.School of Arts hasn’t been significantly updated since the 1850.

Applied Arts, particularly digital art, have been introduced at most. I feel digital art lacks the human touch, without a brush there can be no physical interaction with a canvas. Also, most  artists first sketch with a pencil and then paint over them, which loses the essence of art. Of the new artists, Devdutt Padekar is excellent, especially his landscapes. 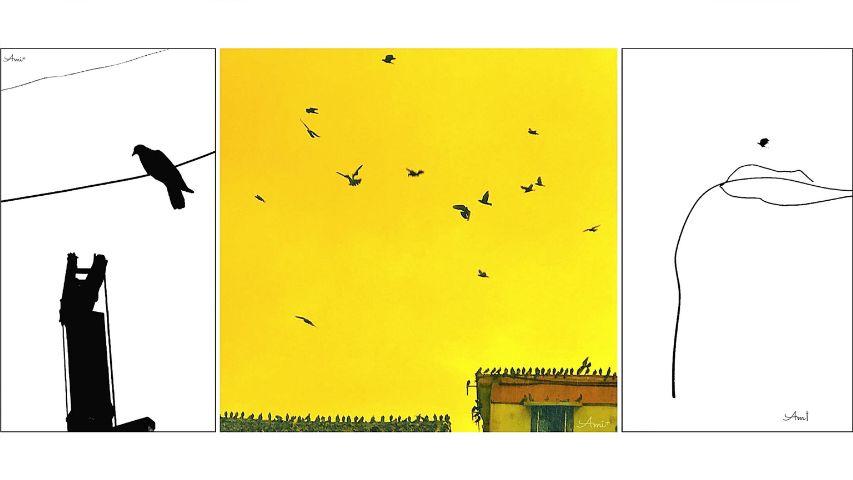 How would you describe the styles of your own artworks and photography?

Abstract.. with an influence of Zen and Taoism, with structured elements blended in. Besides paints, I use charcoal, ink and crayons. Like the series Birds in Space, which I’m working on right now.

And I’m drawn largely towards street photography, to first conceive a composition and then capture the moment, which may involve a person’s body language, whom he or she is talking to, what they’re doing, in order to convey a story with the photograph. I depend on my eye reflexes, clicking the button while holding the camera like a brush. I could make prints of my photographs but I have absolutely no idea about pricing. Architects buy photographs for the buildings they construct but I haven’t networked with them, frankly I’ve no idea how to.

So how do you move forward, get recognised as an artist?

I wish I knew. I don’t see myself sticking my paintings or photographs on a wall for an exhibition. So many artists are in the same situation as I am. Most galleries never tell you the exact price your painting has fetched, plus there’s a huge commission fee. When I went to a gallery, which had stored my paintings for sale, I was told they had been damaged. I couldn’t possibly afford a lawyer’s fee against a gallery. It would be beyond my means. Except the A-list artists, all the others are soft targets.

In Mumbai, the Chemould-Prescott Road, Pundole and Saakshi galleries are hosting some superb exhibitions. As for the auction establishments, like SaffronArt online, I don’t have sufficient stature to approach them. In any case, of late, collectors only go for happy images or see artworks as a means of financial investment. Above all, our political system has become such that advancing art doesn’t figure on the priority list at all.

How do you make a living then?

I keep returning to Grant Road, and earn a living by selling electronic parts. That’s something I’m used to, so no complaints. 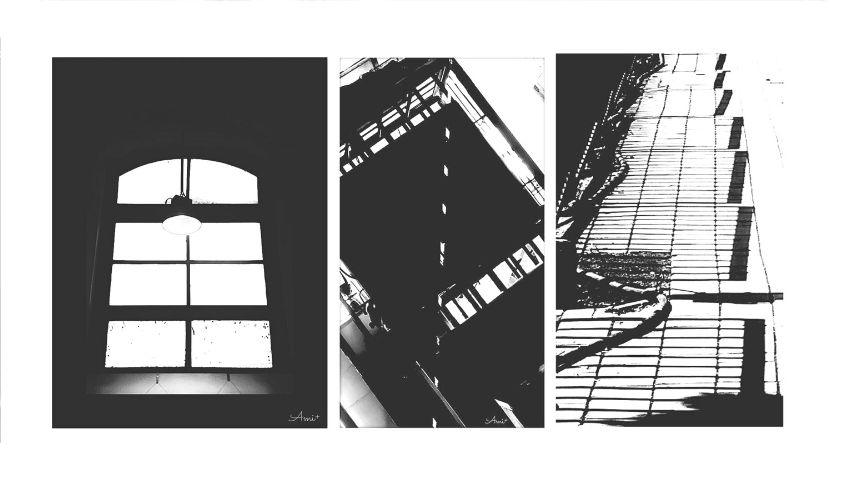 Which has been the worst day in your life?

Must be the lockdown days as they were for all of us. Specifically, the worst day must have been in the ICU where I was admitted for high-level malaria about ten years ago. Another traumatic day was when my publisher friend Shiva Goge was struck by paralysis after a road accident. Neither of us had money - after he was discharged from hospital,  we had to sleep quite a few nights under the J.J. flyover.

And the brightest day?

I was hanging around with the pavement artists outside the Jehangir Art Gallery. An American lady saw my abstracts in black ink and bought 200 of them at one go for Rs 2,000 each. She said she had a hotel in the U.S. and would put them up in the rooms. With the money, I rushed to the Bagdadi restaurant… pet bhar ke khaana khaaya… and then saw Satya at the Eros. I was so taken up by the film that I must have seen it 20 times at least.

You love art, cinema and poetry. So what are your dreams or nightmares about?

Oh,  I can’t tell the difference between dreams and nightmares anymore. They are about people who’ve gone away from my life,  there is the fear about losing my Aaji or I find myself as a stranger in a city like New York. To keep sorted, there is only one way out for me. I meditate every day for an hour or so at least. Perhaps that’s the reason why art matters to me and not materialism or money.